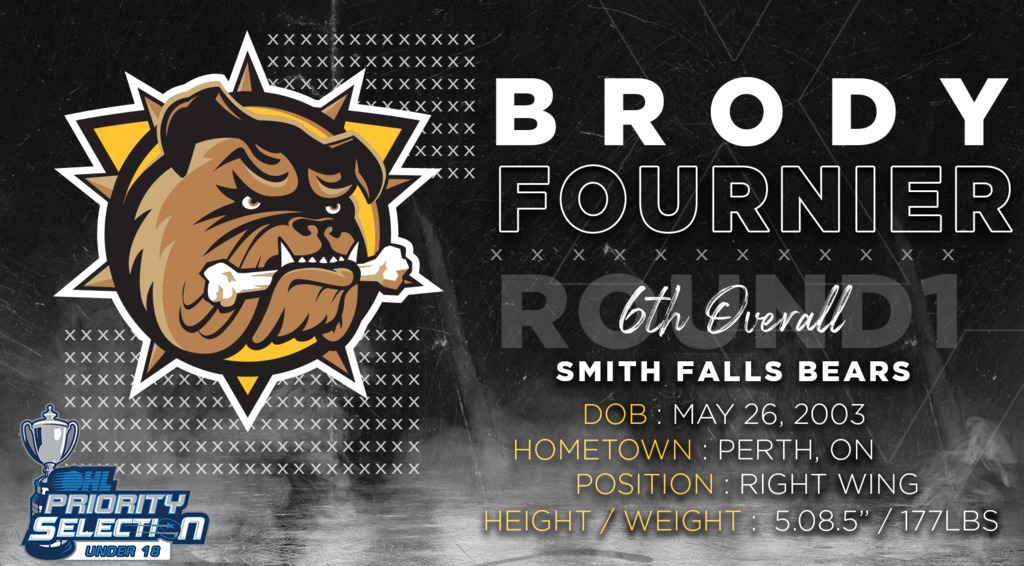 The 2020 Ontario Hockey League Under-18 Draft took place on Wednesday, April 8th and much like the Priority Selection Draft on Saturday was held entirely online, seeing the Hamilton Bulldogs add 3 players to the franchise’s pipeline.

In the 1st round, 6th overall, the Bulldogs selected right wing Brody Fournier from the Smith Falls Bears of the HEO. An offensively gifted forward, Fournier has racked up points at the U18 level beginning in 2018-19 as a 16-year old where he would post 18 goals & 31 assists for 49 points across 44 regular season games finishing second on the team and leading the team in playoff scoring with 5 goals & 5 assists for 10 points in 6 post season games. Fournier performances in the 18-19 season would see him earn a callup to the Smith Falls Bears of the CCHL for 4 regular season games and 1 playoff game. In the 2019-20 season, Fournier would take his output to another level, scoring 34 goals & 34 assists for 68 points over 45 games, leading his team in scoring by an incredible 28 points, while posting another 2 goals & 3 assists for 5 points in 3 playoff games. Fournier would again earn time at the junior level with the CCHL’s Smith Falls Bears, scoring 2 goals & 1 assist for 3 points across 9 games while also appearing in 3 regular season games for the Westport Rideaus of the CCHL2 before scoring 2 goals in his only playoff appearance for Westport. The Bulldogs will be looking for Fournier to continue his development and earn his way into the OHL as his next jump.

In the 2nd round with the 26th overall pick the Bulldogs would add goaltender Omar Hage from the London Jr. Knights. Joining Riley George and Tristan Malboeuf as new additions to the Bulldogs crease, Hage comes off a tremendous season where he posted the best GAA in the AMHPL at 1.43 over 18 regular season games before continuing his success in the playoffs with a 1.67 GAA over 6 post-season starts.

With the 45th overall pick in the 3rd round the Bulldogs would look local, selecting right wing Jackson Mowatt of the Burlington Eagles. The Stoney Creek, ON product really found his stride in the 2019-20 season at the major midget level, nearly doubling his output from his minor midget season, Mowatt would amass 14 goals & 15 assists for 29 points across 32 games in the regular season while adding another 6 goals & 2 assists for 8 points across 12 playoff games with both totals being good for second on the Eagles. Showing advanced leadership as well, Mowatt would be named an assistant captain for the Eagles in the 2019-20 season and was named to the SCTA All-Star Game. Mowatt would also earn a callup to the GOJHL where he would appear in 6 games for the Hamilton Kilty Bees posting 3 assists.

At the end of the 2020 Ontario Hockey League Under-18 Draft the Hamilton Bulldogs have added an additional pair of forwards and a goaltender to an already deep pipeline of talent. Hamilton management, coaches, media and fans will all be looking forward to eventually getting a look at the newest Bulldogs on ice.