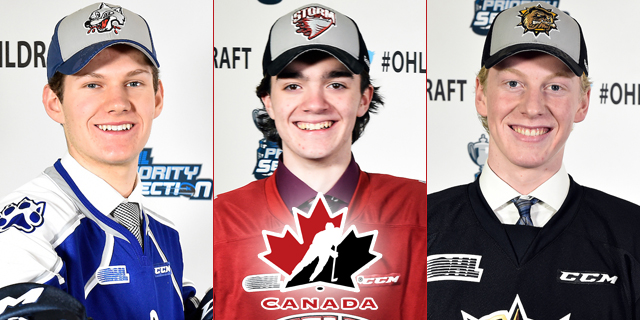 Hockey Canada’s ‘Summer Showcase’ officially opened on Tuesday with many future stars of the Canadian Hockey League arriving in Calgary.

In its second summer, the National Teams’ Summer Showcase will bring together Canada’s National Men’s Summer Under-18 Team selection camp (44 players) and Canada’s national under-17 development camp (111 players) in Calgary, at the Markin MacPhail Centre from July 26-Aug. 2. Canada’s National Junior Team Sport Chek Summer Development Camp (41 players) will be hosted in Toronto July 30-Aug. 2, and will feature a four-game series against Finland, Sweden and the United States from Aug. 3-6 in Plymouth, Mich.

The first component of the ‘Summer Showcase’ features the Canadian National Under-17 Development Camp. From July 26-Aug. 1, 111 players – 12 goaltenders, 36 defenceman and 63 forwards – will participate in practices and games on one of six teams: Black, Blue, Gold, Green, Red, and White.

12 goaltenders, 36 defencemen and 63 forwards participating in #U17Camp this week at the @HockeyCanada HQ in #yyc. pic.twitter.com/p0IyNCr5vW

This year, 110 players have been drafted or listed by CHL teams, including 45 from the Ontario Hockey League, 38 from the Western Hockey League and 27 from the Quebec Major Junior Hockey League.

Following the development camp, players will continue to be evaluated through the early season before 66 are selected to represent Canada on one of three national teams – Team Canada Black, Team Canada Red, and Team Canada White – at the 2016 World Under-17 Hockey Challenge, which is scheduled for Oct. 30-Nov. 5 in Sault Ste. Marie, Ont.

Hockey Canada HQ hosts a sea of red in the Hall of Champions. #U17Camp pic.twitter.com/ArBnZq3R8p