5 KEYS TO GAME 1 OF THE MASTERCARD MEMORIAL CUP: BULLDOGS vs Pats 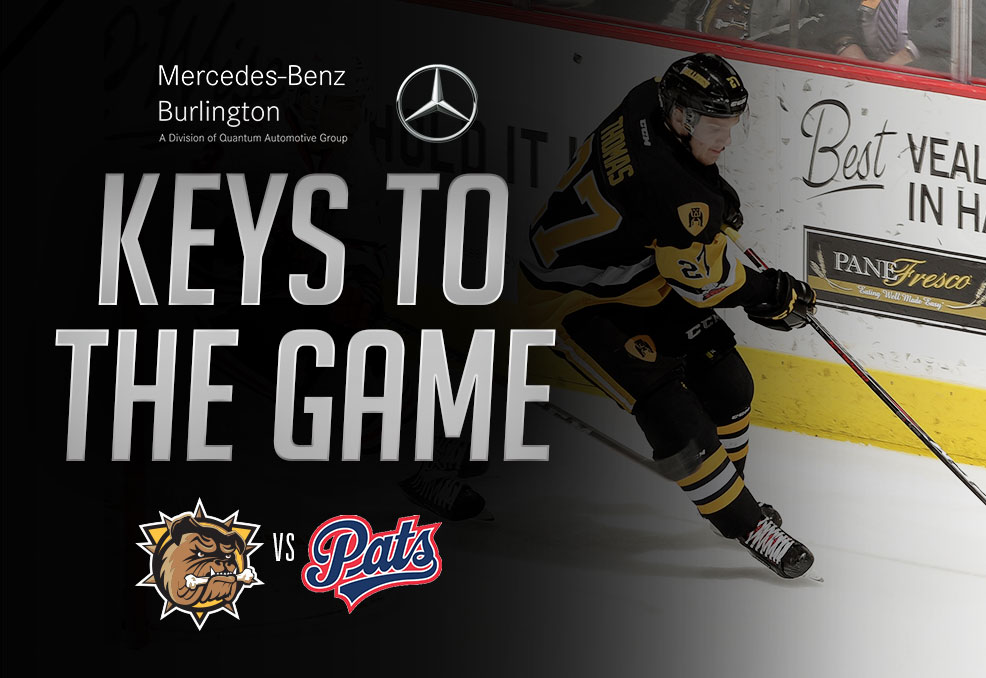 The Bulldogs ranked an impressive 3rd in the CHL in playoff goals per game, scoring a total of 91 in the OHL playoffs. The biggest plus for Hamilton was that they could rely on any line to go out and score a big goal. This is evident from the fact that 12 players (9 forwards and 2 defensemen) on the Bulldogs had 10 or more points in the playoffs.

The Pats managed to average just 2.86 goals per game in their series against the eventual WHL champion Swift Current Broncos. During the regular season the Pats finished 12th in the league in goals for.

The last 3 Memorial Cups have gone to the OHL, a trend that the Bulldogs hope to continue. The Windsor Spitfires won the Cup on home soil last year, and the London Knights (2016) and Oshawa Generals (2015) took home the championship each winning overtime thrillers. A WHL team has not won the Memorial Cup since 2014 when the Edmonton Oil Kings captured the title.

Caamano closed out the 2018 playoffs with a 4-game goal streak including what stood as the game winner in a series clinching Game 6 win. Caamano’s 10 playoff goals, 4 of which were game winners, ranked him 3rd on the Bulldogs and his 22 playoff points puts him at 4th on the team.

Steel finished off the playoffs with a 4 game point streak that saw him put up an impressive 9 points in that span. Steel has been a fixture for the Pats over their last 3 playoff runs amassing an eye-popping 18 goals and 57 points in 44 games.

This game will be a Memorial Cup first for most of the players stepping on the ice at the Brandt Centre tonight. Robert Thomas won the Cup with the London Knights in 2016, posting one assist in 4 games played. Nicolas Mattinen was part of that London Knights team that won the Memorial Cup, however, he did not suit up in the tournament. Also, with experience is Riley Stillman who played 9 regular season games as a rookie for the Oshawa Generals, but didn’t dress in the team’s run to the 2015 Memorial Cup.

The Pats were very close to making the Memorial Cup last season, but they fell to the Seattle Thunderbirds in the WHL championship.

Pats defemceman Aaron Hyman is playing in a second consecutive Mastercard Memorial Cup following a stint with the WHL Champion Seattle Thunderbirds in 2017. Another Pats defenceman, Josh Mahura is also making his second appearance in the Mastercard Memorial Cup after being a member of the 2016 host Red Deer Rebels that fell in the semi-final to the QMJHL Champion Rouyn-Noranda Huskies.

Kaden Fulcher was a wall for the Bulldogs in the OHL playoffs. The Brigden Ontario native posted a 2.7 goals against average and a .905 save percentage in the playoffs, starting all 21 games and not being pulled once. Fulcher was a key reason that the Bulldogs were able to close out the Greyhounds in 6, as in the final game he made 40 saves including a couple of big ones in the 2nd period.

Ryan Kubic was acquired by Regina at the trade deadline from the Saskatoon Blades. He started all 7 games for the Pats in their playoff series against the Broncos posting a 3.08 goals against average with a .891 save percentage. This was Kubic’s first taste of playoff experience, as he missed the playoffs the previous two years playing for the Vancouver Giants.