9 BULLDOGS OFF TO NHL ROOKIE CAMPS 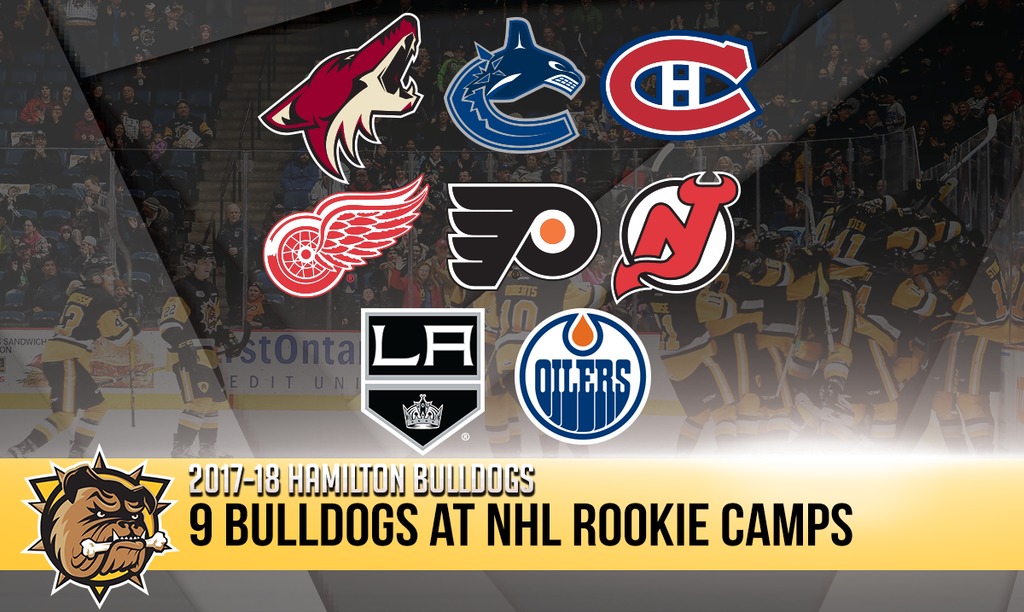 Bulldogs head coach John Gruden and his coaching staff may have to put the gear on to have enough bodies on the ice for practice for the next week or so. That’s because nine Bulldogs have left to take part in NHL Rookie Camps across North America.

Montreal prospect Will Bitten is at the Canadiens camp with that squad to play in a Rookie tournament in Toronto against Maple Leaf and Ottawa Senators hopefuls.

Cole Candella, a Vancouver Canucks draft pick will take part in the Young Stars Classic in Pentiction, B-C going up against rookies from the Edmonton Oilers, Winnipeg Jets and Calgary Flames. Candella will be facing Bulldogs team-mate Brandon Saigeon, who will skate for the Oilers as a free-agent invite.

The four Bulldogs who were selected at the NHL Draft in June are off to their first Rookie Camps.

Mackenzie Entwistle, a 3rd round pick of the Arizona Coyotes, is in San Jose for a tournament against the Sharks, Colorado and Anaheim.

Philadelphia’s 4th round pick Matthew Strome is at the Flyers Rookie Camp and will take part in an All-Rookie game against the New York Islanders.

Marian Studenic will be wearing Devils colours as New Jersey’s 5th round selection takes part in the 2017 Prospects Challenge in Buffalo against rookies from the Sabres, Boston Bruins and Pittsburgh Penguins.

It’s off to the annual Traverse City Prospects Tournament for Reilly Webb who was drafted in the 6th round by the Detroit Red Wings. Webb will be joined by Bulldogs team-mate Kaden Fulcher, with the free-agent invite one of three goaltenders on the Wings roster.

Matt Luff will be taking part in his second L-A Kings Rookie Camp. Last year Luff went as a free-agent and impressed so much, he was signed to a 3-year entry level contract. There is a good chance Luff won’t be back in Hamilton this season, but is eligible to return as an overager.

Also of note, Niki Petti, who graduated from the Bulldogs after last season, is at the Montreal Canadiens camp. Petti inked a 1-year deal with the Habs AHL affiliate in Laval. Another graduated Bulldog, Michael Cramarossa, was invited to the Chicago Blackhawks camp. Cramarossa has committed to attend school and play hockey for McGill University.