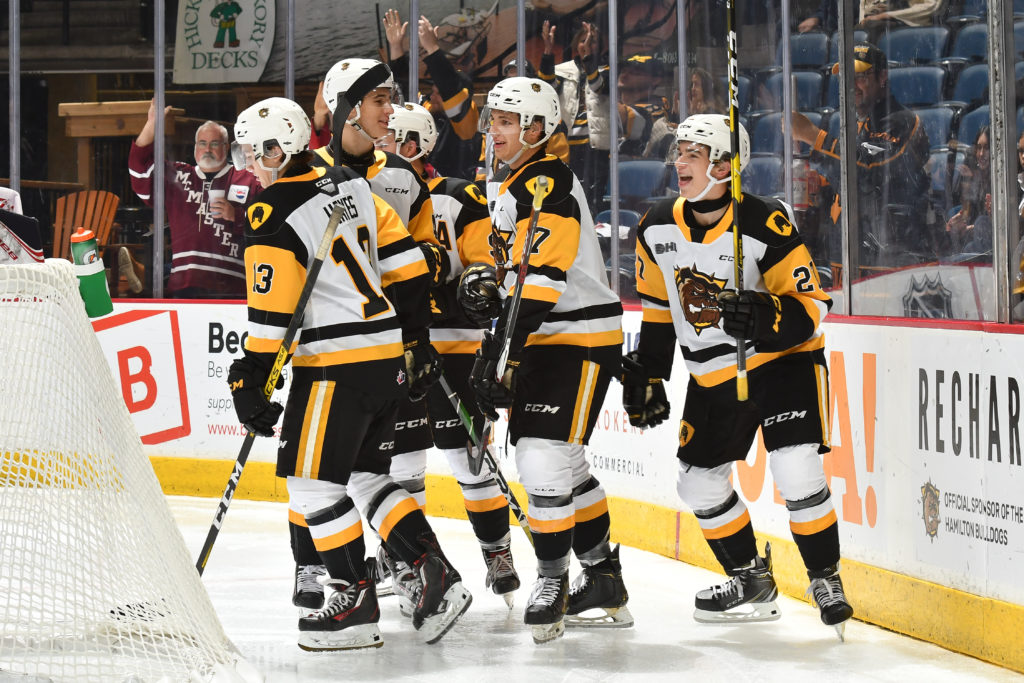 HAMILTON, ONTARIO. Tag Bertuzzi & Zachary Roy combined in the third period and the shootout to give the Hamilton Bulldogs a streak snapping 3-2 victory over the hard-working Kingston Frontenacs.

The first period began in style for the Hamilton Bulldogs with Jan Jenik pinballing a puck past Kingston goaltender Brendan Bonello at 6:55 giving the Bulldogs a 1-0 lead. They would nearly double the advantage moments later with Logan Morrison on the power-play taking a goal mouth feed and nearly beating a sprawled Bonello. Morrison would have another opportunity later in the period, taking a feed in the slot and walking down to the hashmarks before letting go a wrist shot that Bonello would again come up large on to keep the deficit at one. At 15:25 of the first period, Shane Wright would pick the pocket of a Hamilton defender and drive the Bulldogs goal, where Zayde Wisdom would punch in the rebound, tying the game at 1-1 where the contest would stand heading to the locker room after 20 minutes.

In the second, the Frontenacs would have an early power-play, seeing Billy Constantinou rip a shot off the under side of the crossbar before Jakob Brahaney would find Zayde Wisdom alone in front of the Bulldogs goal for his second of the game at 4:47. It was then Kingston’s turn to nearly double the lead when Ian Martin would jump on a rolling puck and force Zachary Roy into one of his many highlight saves on the night to keep the game 2-1 after 40 minutes.

It was in the third period where Roy would steal the show, first a diving glove save on Nick Wong as he bolted off his goal-line and extended forward to rob the Kingston forward, following that up with a dynamic left to right push to save another near certain goal. Those saves set the stage for an incredible effort from Tag Bertuzzi who took advantage of a late Bulldogs power-play, breaking in and splitting two Kingston defenders, tucking the puck past Bonello’s pad tying the game and sending the contest to overtime.

Zachary Roy would come up big again with the biggest save of the extra 5 minutes, robbing Constantinou on a breakaway with the glove. With the game in a shootout, Bertuzzi would score the only goal while Roy would stop all three Frontenac shooters to give Hamilton the 3-2 victory.

The Hamilton Bulldogs will next see action on Friday night at the Erie Insurance Arena against the Otters before returning home, Thanksgiving Monday to host TiCats against the Barrie Colts at 2pm.