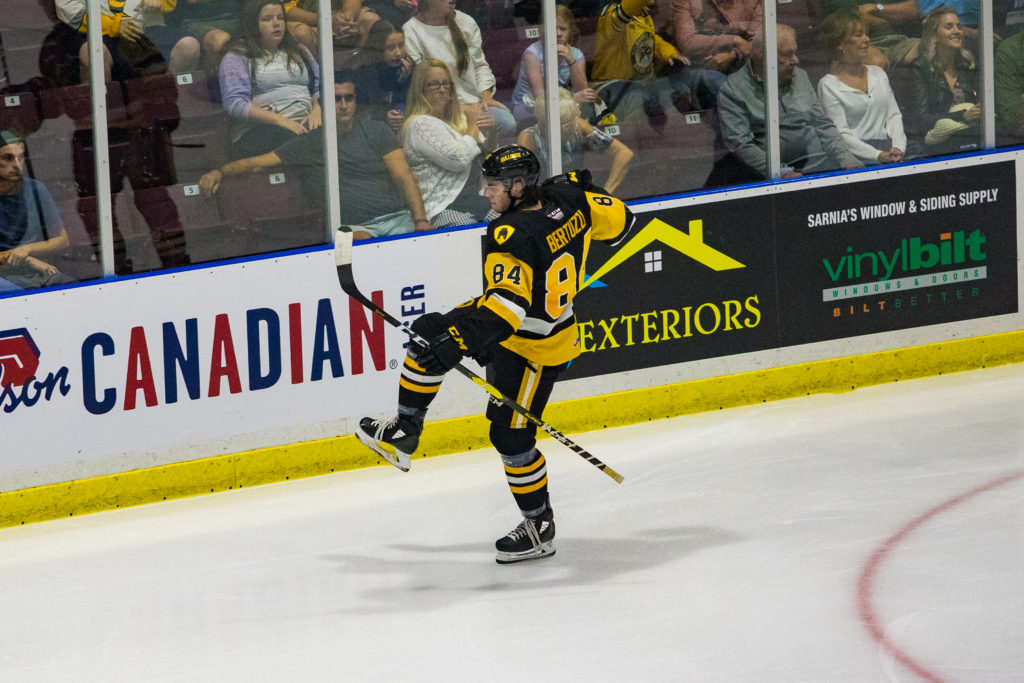 HAMILTON, ONTARIO. In a back and forth battle full of drama and skill it was a four-goal effort, including the overtime winner to lead the Bulldogs past the Sudbury Wolves by an 11-10 final. The game included a hat-trick from Avery Hayes and four points from Arthur Kaliyev.

Closing out the team’s longest road trip of the season the Bulldogs showed a lot of jump to open the first period and would get the start the team needed. At 6:40 while shorthanded Avery Hayes would poke the puck away from a pair of Wolves attackers and race into possession in open ice and streaking at Christian Purboo, Hayes would shift to his backhand and lift the puck over the Wolves goaltender giving the Bulldogs an early lead. The rest of the period would see the Wolves take over, including a pair of power-play goals off controversial penalty calls. Kosta Manikis would record his 4th of the year at even strength to tie the game at 8:45, followed by Byfield’s 17th off a rolling puck from a faceoff that wiggled through Zachary Roy at 16:04 before Shane Bulitka struck on the power-play again 40 seconds later to give the Wolves a 3-1 lead heading to the first intermission.

The second period would see a gold rush for the Bulldogs as the teams’ combined for 11 goals, 8 of which scored by Hamilton. At 0:51 Avery Hayes scored his 2nd of the game & 6th of the season from Navrin Mutter & Cameron Supryka to start the comeback at 3-2. Bradey Johnson would follow that up scoring from one knee sliding towards the net at 3:01 from Ryan Winterton & Lawson Sherk followed just 3 seconds later as Tag Bertuzzi recorded his 8th of the season from Jan Jenik & George Diaco giving the Bulldogs a 4-3 lead, chasing Christian Purboo. The Wolves would respond with a pair, David Levin’s 9th of the season would come shorthanded at 5:40 followed by Nolan Hutcheson’s 7th at 6:59 giving Sudbury a 5-4 lead and prompting the Bulldogs to replace Zachary Roy with Marco Costantini. Again the Bulldogs would respond, scoring four in a row, first it was Tag Bertuzzi’s 2nd of the game & 9th of the season to tie the game 5-5 from Kaliyev & Jenik at 7:54, Hayes would then record his hat-trick goal to give the Bulldogs the lead back at 8:25 from Morrison & Mutter, just 10 seconds later at 8:35 Arthur Kaliyev recorded his 23rd of the year to take a 7-5 lead at 8:35. With the Bulldogs on the power-play at 13:07 Cameron Supryka would further bubble the Bulldogs lead to three, scoring his 1st of the year from Gravelle & Winterton, Mitchell Weeks would then be pulled from the Sudbury net and replaced with Christian Purboo who had started the game for the Wolves. Sudbury would get an answer, Blake Murray’s 11th cut the Bulldogs lead to 8-6 at 17:23 but before the period was out Tag Bertuzzi would record his 3rd of the game, 10th of the year from Kaliyev & Renwick at 19:16 giving the Bulldogs a 9-6 lead through 40 minutes.

The third period was another wild affair with the Wolves mounting a comeback of their own, scoring 3 goals in just over 7 minutes as Carson, Stillman & Thompson each potted to tie the game at 9-9. At 12:43 with the Bulldogs on the power-play, Jan Jenik would navigate through the traffic into the Sudbury zone and lay the puck for Arthur Kaliyev to fire over Purboo’s shoulder giving the Bulldogs a 10-9 lead. With just 13 seconds left in the game and the Sudbury net empty, Macauley Carson would controversially tip down a Blake Murray shot well above his shoulder to tie the game at 10-10.

Overtime was a back and forth battle before Logan Morrison would spring Tag Bertuzzi to the middle of the zone, going with a self-flip being tripped as he caught up to the puck and scoring while flying through the air with just 7 seconds left in the extra frame to give the Bulldogs a dramatic 11-10 victory to close the road trip.

The Hamilton Bulldogs return home on Wednesday November 20th as the team hosts the Peterborough Petes in the second School Day game of the season at 10:30am.