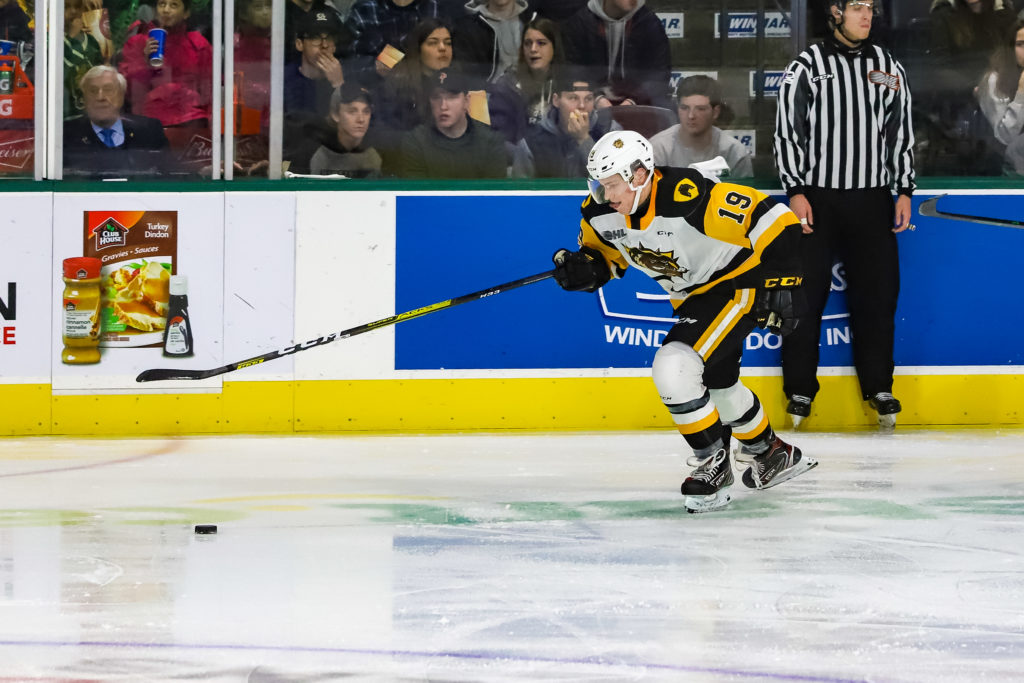 HAMILTON, ONTARIO. The Hamilton Bulldogs showed a ton of heart and determination, rallying back from 6-0 down to gain a point in the Saturday night clash. Jan Mysak had his first multi-goal game in the OHL while Ryan Winterton chipped in a pair of his own in the loss.

It was a nightmarish opening 20 minutes for the Hamilton Bulldogs at Sadlon Arena on Saturday night that started with Ethan Cardwell taking a breakout pass 0:35 seconds into the game, and with the official running over Bulldogs defenseman Jake Gravelle, Cardwell would score his first of four in the period. The next 10 minutes were controlled by Hamilton pouring shots to Jet Greaves goal but were unable to crack the Barrie netminder. Starting at the 11:18 mark of the frame a flood of Barrie offense, 5 straight goals, started by Ethan Cardwell recording his 2nd of the game & 15th of the season, followed closely by Nicolas Porco scoring his 8th at 13:18 to make it 3-0. The Colts would then record three goals in less then a minute and a half, Nathan Allensen’s 7th on the power-play at 14:25, Ethan Cardwell’s 3rd of the period, 16th of the year on the power-play at 15:27, followed up by his 4th of the night, 17th of the season at 15:56 to give the Colts an emphatic, period closing 6-0 lead that the Bulldogs would have to fight back from.

The fight back began at 5:25 of the second period as Jan Mysak showed incredible speed breaking away from Barrie defenders shorthanded and tucking the puck through Jet Greaves to make it 6-1 on his 2nd of the year. Navrin Mutter would follow at 9:30 of the second period, firing off the right-wing boards and beating Greaves for his 5th of the season from Mark Duarte & Payton Vescio. The Bulldogs would cut the lead to 6-3 at 12:27 as Ryan Winterton would record his 8th of the season from on top of the right circle from George Diaco & Michael Renwick. After Nathan Allensen would take 7 minutes in penalties for attacking Nathan Staios, the Bulldogs would give one back shorthanded as Josh Nelson roofed his 6th of the year at 19:04 but the Bulldogs would quickly get it back with George Diaco slamming home a loose puck off a Lawson Sherk rebound at 19:36 to end the period at 7-4.

The Bulldogs would make it all the way back to tie the game early in the third as Jan Mysak would record his 2nd of the game and 3rd of the season 1:10 on a tip from Nathan Staios point shot on the power-play followed by Ryan Winterton shelving his 9th of the season off the right circle from a Kade Landry feed at 2:49 also on the power-play. At 7:07 of the period Liam Van Loon would feed Payton Vescio at the right point and his long shot would be tipped by Logan Morrison past Greaves to tie the game 7-7. The game would stay knotted through the end of the third period and send an already wild game into overtime.

Off the drop of the puck in overtime, the combination of Kaliyev and Mysak would control possession, but when the puck froze on Kaliyev just inside the Barrie blueline Victor Hadfield would jump on it, sending Aiden Brown in on a breakaway to score the game winner at 1:04 of the extra period.

The Hamilton Bulldogs will return home for a matinee on Sunday, January 26th at FirstOntario Centre hosting the Peterborough Petes for a 1:00pm puck drop.