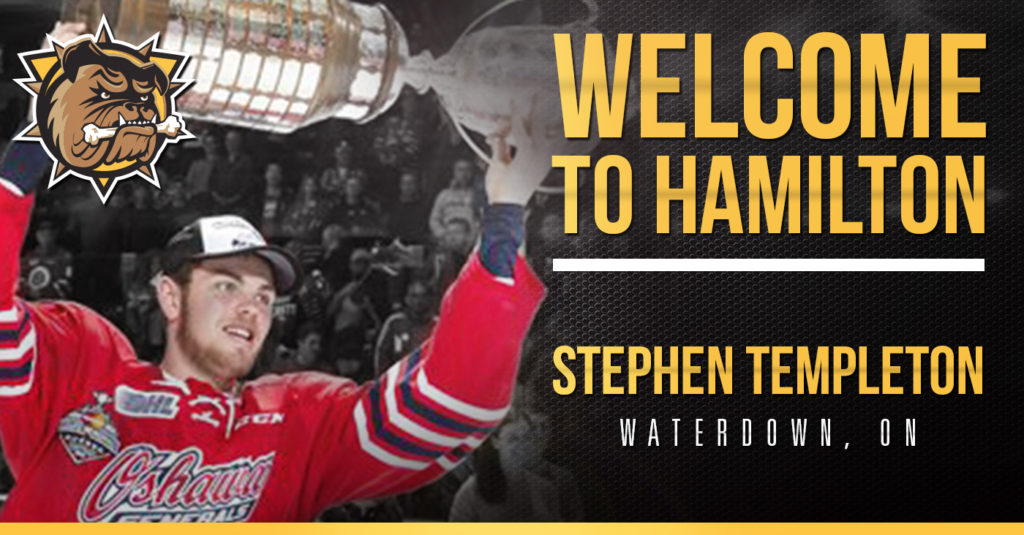 Hamilton Bulldogs President and General Manager Steve Staios announced this morning that the team has acquired defenseman Stephen Templeton, a 5th round draft pick in 2017 and a conditional 6th round pick in 2019 from the North Bay Battalion.

In return, the Bulldogs send defenseman Jesse Saban and a 10th round pick in 2017 to North Bay.

The 19-year-old Waterdown native was a 6th round pick by Oshawa in the 2013 OHL Priority Selection. In 126 career OHL games, Templeton has scored three goals and earned 12 assists for 15 points with 116 penalty minutes. He has appeared in 11 playoff games and was a member of the Generals’ 2015 Memorial Cup winning team.

“Stephen brings playoff experience and a winning attitude to the Bulldogs,” said Staios. “He has been part of a championship team and will be a great addition to the team’s blueline.”

Templeton is the grandson of the late Bert Templeton, legendary OHL coach, who won a Memorial Cup with the Hamilton Fincups in 1976.

Stephen Templeton is expected to be in uniform Wednesday night when the Bulldogs play in Sarnia vs the Sting.