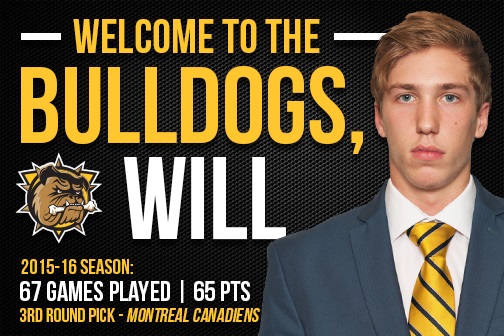 Hamilton Bulldogs President & General Manager Steve Staios announced today that the team has completed a trade with the Flint Firebirds.

Bitten from Ottawa, Ontario, played in 67 games last season for the Firebirds registering 30 goals, 35 assists for 65 points.  Bitten has also represented Canada on three occasions at the World Under 17’s in 2014, Ivan Hlinka Memorial Tournament in 2015 and the IIHF World Under 18 Championship in 2016.

“We are excited to welcome William to the Bulldogs family” said Staios.  “William is the type of player that the Hamilton Bulldogs covet.  He will provide us with speed, skill and work ethic.  He will be an integral piece of our hockey club moving forward.”

Bitten will not be in Hamilton’s line-up tonight when the Bulldogs play in Owen Sound, but he is expected to join his new teammates in time for Friday night’s game in Guelph.

The Bulldogs would like to thank Connor Hicks and Fedor Gordeev for their contributions to the organization.