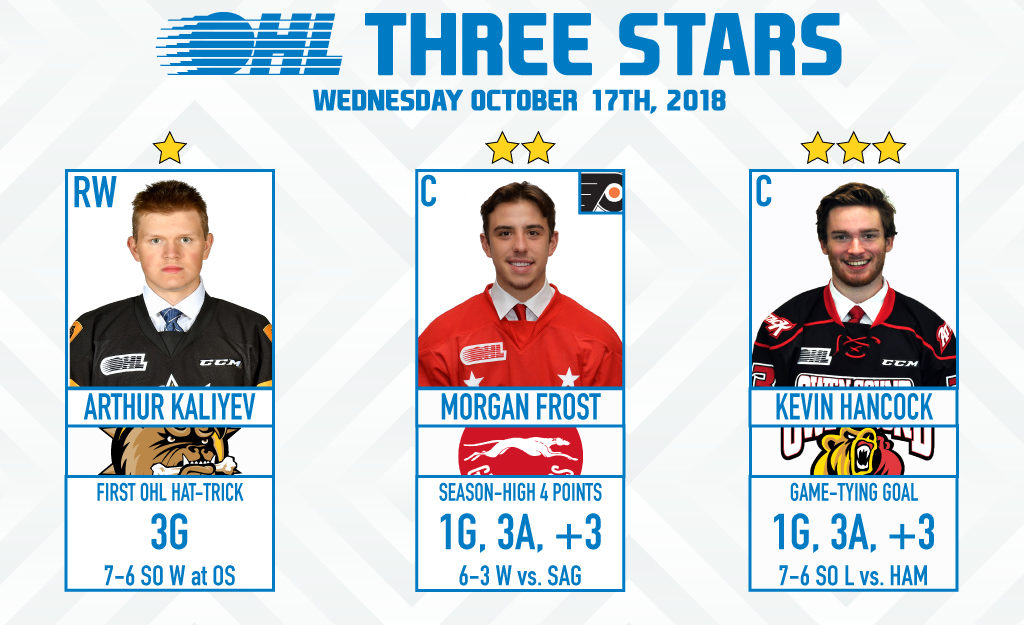 1ST STAR: ARTHUR KALIYEV (HAMILTON BULLDOGS):
After scoring 31 goals as a 16-year-old, 2019 NHL Draft prospect Arthur Kaliyev recorded his first OHL hat-trick on Wednesday in Owen Sound. The 6-foot-2 right-winger picked up his 10th, 11th and 12th goals of the season, scoring once in the first period and twice in the second as the Bulldogs earned their third straight win. Kaliyev’s 12 goals place him second in the OHL this season behind Kingston’s Jason Robertson. The native of Staten Island, New York was designated as an ‘A’ rated prospect on NHL Central Scouting’s October ‘Players to Watch’ List.
• GAME HIGHLIGHTS

2ND STAR: MORGAN FROST (SAULT STE. MARIE GREYHOUNDS):
Philadelphia Flyers prospect Morgan Frost put up four points to lead the Soo Greyhounds to a 6-3 win over visiting Saginaw. Frost’s lone goal on the night went into the empty net, but the 19-year-old centreman picked up three assists in the victory to tie him for second in OHL scoring with 19 points (6-13–19) over 11 games. Frost won 10 of his 17 faceoffs on the night and now has multi-point outputs in three of his last four games.
• GAME HIGHLIGHTS

3RD STAR: KEVIN HANCOCK (OWEN SOUND ATTACK):
Kevin Hancock scored midway through the third period to tie the score at six and help the Owen Sound Attack earn a point in the OHL’s first shootout outcome of the season. The Attack ultimately fell a bit short, but Hancock had a goal and three assists on the night in addition to a 12-for-17 showing in the faceoff circle and eight shots on goal. The overage centreman’s four-point night brings his season totals to 12 points (5-7–12) over 10 games, bringing him four away from 200 on his OHL career. The Mississauga, Ont. native attended training camp with the Buffalo Sabres last month.
• GAME HIGHLIGHTS