BULLDOGS BEAT OTTAWA FOR 4th WIN IN A ROW 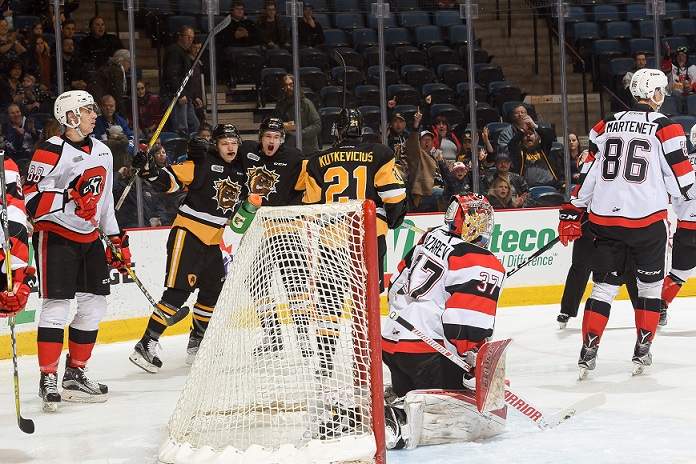 The Hamilton Bulldogs built up an early lead and then held on for a 4-3 win over the Ottawa 67’s Saturday night at FirstOntario Centre for their fourth win in a row.

The Bulldogs got off to a quick start as Marian Studenic (14) finished off a pretty give and go with Zachary Jackson at the 2:00 mark of the opening frame. Justin Lemcke picked up the second assist on the play. Brandon Saigeon’s (18) goal scoring tear continued as Saigeon found the back of the net 52 seconds later to give Hamilton a 2-0 lead. Will Bitten and Benjamin Gleason got the helpers. Saigeon now has six goals in his last three games and ten in his last ten. Studenic (15) would strike again at 3:43, this time with Matthew Strome and Niki Petti getting the assists, as the Bulldogs led 3-0 after the opening twenty minutes.

Ottawa got the only goal of the second period to cut Hamilton’s lead to 3-1.

Niki Petti (15) redirected a Ben Gleason point shot to give the Bulldogs a 4-1 lead early in the third. Connor Walters got the other assist. That proved to be a big goal because Ottawa scored twice to cut the Bulldogs lead to 4-3, but the home side was able to shut things down and held on for the 4-3 win.

Marian Studenic’s 2 goal performance earned him 1st star honours. Niki Petti, who was the 2nd star of the game, had a goal and an assist. The 3rd star went to 67’s goaltender Olivier Lafreniere, who stopped 17 of the 18 pucks directed his way.

The win moves Hamilton into a tie with Kingston for fourth place in the Eastern Conference standings with the idle Frontenacs holding a game in hand.

The Bulldogs next game is on Family Day, Monday, February 20th when they play host to the Kitchener Rangers at FirstOntario Centre at 2 pm.