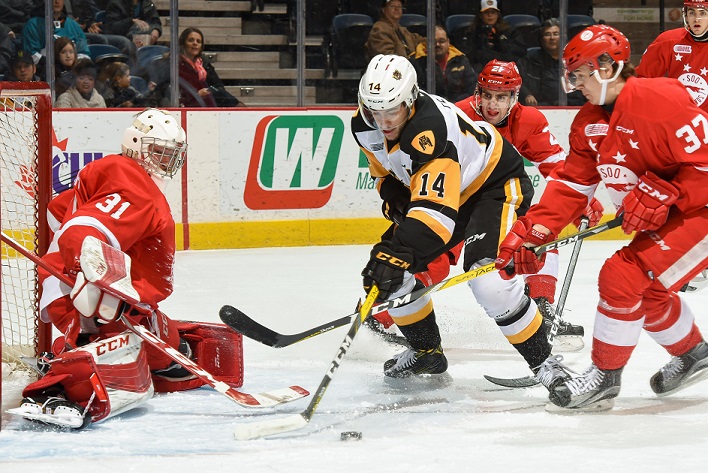 The Hamilton Bulldogs were hoping to end a seven game home stand on a positive note Sunday afternoon, but they ran into one of the hottest teams in the Ontario Hockey League and lost 7-2 to the Sault Ste. Marie Greyhounds.

A decent start for the Bulldogs in the first period but the wheels started to fall off at the 11:00 mark as Jack Kopacka scored to give the visiting Greyhounds a 1-0 lead. Less than seven minutes later the Soo had a 4-0 lead with Kopacka leading the way with the hat-trick.

The one bright spot for the Bulldogs came early in the second period as the power-play struck for two goals, both coming off the stick of captain Justin Lemcke (6, 7) cutting the deficit to 4-2. But the Greyhounds scored two more, including the fourth of the afternoon from Kopacka, as the Soo took a 6-2 lead to the dressing after forty minutes.

The only goal in the third period came late as the Greyhounds added insult to injury at 18:26 to make the final score 7-2.

Meanwhile, the Bulldogs have lost five in a row and eight of their last nine and finished the seven game home stand 1-4-0-2.

The Bulldogs begin a home and home series with the Mississauga Steelheads on the road Friday night before the two teams return to FirstOntario Centre on Saturday December 17th at 7 pm.