BULLDOGS CAN’T REEL IN THE STEELHEADS 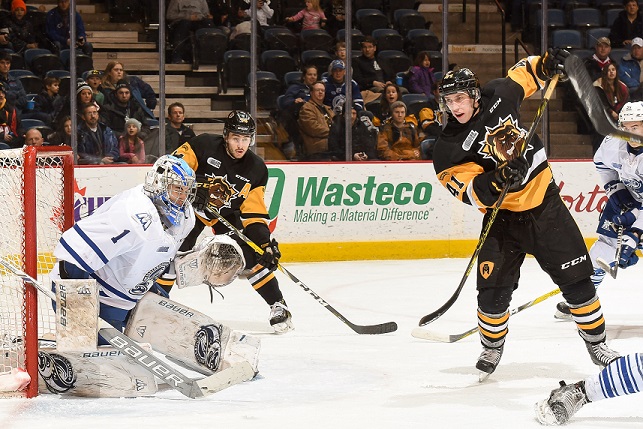 The Hamilton Bulldogs lost to the Mississauga Steelheads 3-1 Wednesday night in their first home game of 2017 ending their three game winning streak.

Chances were few and far between in the first period, but it would be the Steelheads who would get the only goal of the period to take a 1-0 lead at 13:58.

The Bulldogs power-play went to work in the second as Michael Cramarossa (11) scored at 10:14 to tie the game 1-1. Justin Lemcke and Cole Candella picked up the assists. However, Mississauga grabbed the lead back with a goal at 15:40 to make it 2-1 Steelheads.

Both teams failed to capitalize on power-play opportunities in the third, including long 5-on-3’s for both teams. The Steelheads scored an insurance goal at 17:34 to make the final 3-1 for the visitors.

Mississauga outshot Hamilton 34-25 as Bulldogs goalie Dawson Carty was busy in his first game in front of the Hamilton crowd since being acquired last week from Kitchener.

Hamilton continues a three game home stand Friday night when they host the Oshawa Generals at 7:30 pm at FirstOntario Centre. The Niagara IceDogs are in town Saturday night at 7 pm.