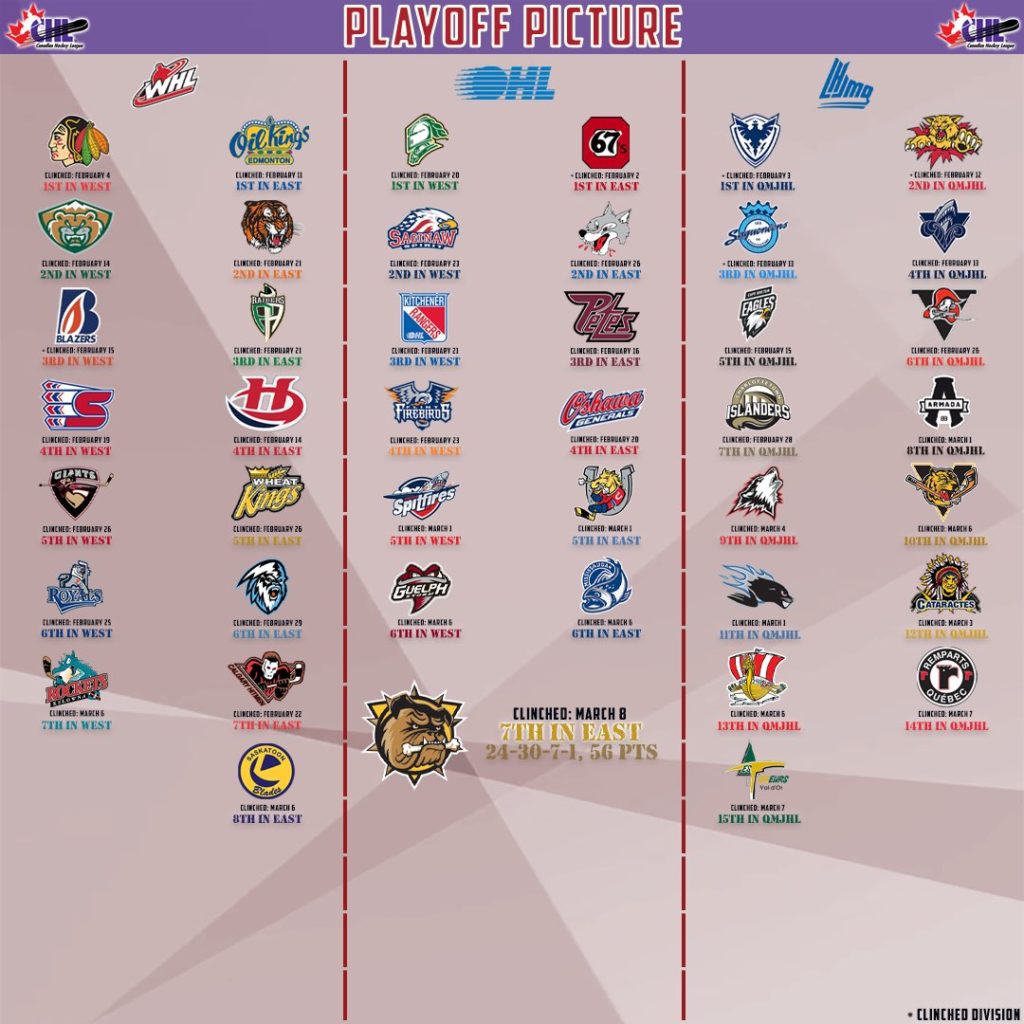 HAMILTON, ONTARIO. On Sunday evening it became official that the Hamilton Bulldogs had clinched a playoff berth for the 4th straight season. With losses for both the Niagara IceDogs & Kingston Frontenacs it became a mathematic impossibility for the Bulldogs to finish any lower than in the 7th seed in the Eastern Conference.

For the 4th straight season the Hamilton Bulldogs will appear in the Ontario Hockey League Playoffs. Currently sitting in the 7th seed in the Eastern Conference Hamilton has amassed 56 points on the season sitting 14 points ahead of both the Niagara IceDogs & Kingston Frontenacs with just 6 games remaining in the season for all three teams.

The Bulldogs franchise made its’ first playoff appearance in Hamilton in 2017, squaring off with the rival Kingston Frontenacs. The series would swing wildly with the Bulldogs winning the first two meetings in Kingston before the Frontenacs would run up three wins in a row setting the stage for Game 6 in Hamilton. Falling behind 2-1 in the second period, Will Bitten would tie the game at 10:03 of the period beginning a run of four straight Bulldogs to force the series to a decisive Game 7. The series would be decided in overtime, with the teams deadlocked at 2-2, it would take Linus Nyman scoring his 2nd of the game at 8:48 to send the Bulldogs home.

Hamilton would use the heartbreak of 2017 as motivation as they hit the 2018 OHL Playoffs as the #1 seed in the Eastern Conference and added the likes Nick Caamano, Ryan Moore, Riley Stillman, Nic Mattinen & eventual playoff MVP Robert Thomas on the way to a franchise defining run. Dispatching Ottawa, Niagara and playoff rival Kingston all in 5 games to win the Bobby Orr Trophy as Eastern Conference Champions. It would be down to a matchup with the Sault Ste. Marie Greyhounds for the J. Ross Robertson Cup who had run the season wire to wire as the #1 ranked team in Canada. The Bulldogs would surprise the Greyhounds handing them their first home ice loss in Game 1 before the Hounds would equalize in Game 2. The two sides would split the next two games in Hamilton, returning to the Soo for Game 5. The Bulldogs would explode out of the gates to a 5-1 lead thanks in large part to two early points each from Robert Thomas, Brandon Saigeon and then rookie sensation Arthur Kaliyev. The Greyhounds would mount a fierce comeback, getting the game to 5-4 and pressing for a tying goal but a Nick Caamano empty netter would finish Game 5 and give the Bulldogs the chance to clinch the Championship on home ice in Game 6. Despite an early 2-0 deficit in Game 6 the Dogs would battle back second period goals from Brandon Saigeon and MacKenzie Entwistle would equalize but before the frame was out the Greyhounds would nose back in front 3-2. A crucial 20 minutes would be the best the Bulldogs had seen all season as goals just 3:02 apart from Riley Stillman and Robert Thomas would set the Bulldogs in position to capture their first OHL Championship and it would be realized when Nick Caamano hit the empty Greyhounds goal, despite a late Soo push that led to a 5-4 goal with 0:45 to go, the Bulldogs would celebrate a Championship on home ice in front of over 9,000 fans.

Returning to the playoffs in 2019 was a much different Bulldogs team, having graduated 12 members of the 2018 Championship team and trading another 4 during the 2018-19 season, a young Bulldogs team would go up against an Ottawa team bolstered by additions of their own this time around. Despite a four game exit a young group of Bulldogs would learn valuable lessons on how to become the next Championship group for Hamilton.

Entering the 2020 OHL Playoffs the Hamilton Bulldogs are the youngest team in the league with the fewest cumulative games played in the Ontario Hockey League. Despite that, Arthur Kaliyev continues to make history re-writing the Hamilton Bulldogs record book and is on the verge of his second straight 100-point season, Jan Mysak has arrived from the Czech Republic’s Extraliga and electrified since pulling on the black & gold while Logan Morrison & Tag Bertuzzi have crossed the 20 goal plateau for the first time and rookie Ryan Winterton & Lawson Sherk have impressed a group led by home grown captain Isaac Nurse, gritty center Bradey Johnson and talented defenseman Kade Landry (with Nurse and Landry having been part of the 2018 Championship roster). This young group is poised and ready to take on any challenge as they break new ground together, looking to shock the East and the OHL entirely.

The Hamilton Bulldogs will return to action visiting the Kingston Frontenacs on Friday, March 13th at 7:00pm before returning home for back to back games hosting the Mississauga Steelheads on Saturday, March 14th at 7:00pm and the Sudbury Wolves on Sunday, March 15th at 2:00pm.