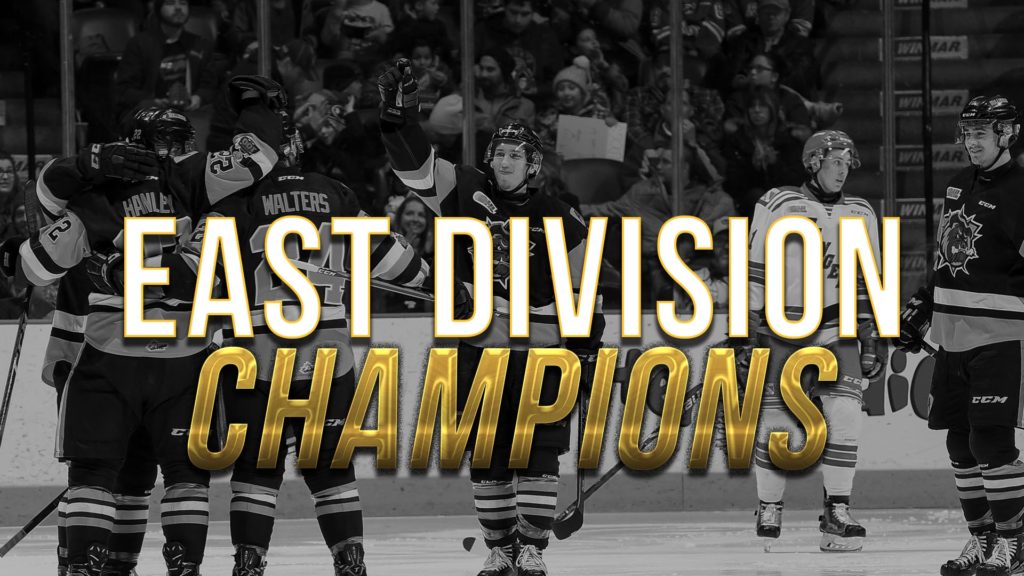 The Hamilton Bulldogs clinched the OHL’s East Division Championship Saturday night with a 4-1 win over the Oshawa Generals combined with an 8-3 Kingston loss to the Barrie Colts.

For the Bulldogs, it’s the organization’s first division crown since relocating to Hamilton for the 2015-16 season.

The visitors from Oshawa had some jump to start the game and had control of the play for the first few minutes, but it was the Bulldogs who got on the board first. Ryan Moore (16) was sent in alone and made no mistake at 8:54 to give Hamilton a 1-0 lead.

It was all Bulldogs in the 2nd period as they pumped in three goals to take a 4-0 lead as the Generals were held to just three shots on goal. Nicholas Caamano (25), Moore (17) with his second of the night and a power-play goal from Brandon Saigeon (35) put the Black and Gold in full control heading into the 3rd period.

Again, Hamilton played shut down hockey in the final period and while Oshawa scored once just before the halfway mark, that was it as the Bulldogs won their 6th straight game.

The Bulldogs out-shot the Generals 38-19.

The Oshawa goal was scored by Allan McShane (18).

With the win, the Bulldogs regular season record improves to 41-16-3-3.

Hamilton Is back in action Wednesday March 7th when they host the Barrie Colts at FirstOntario Centre at 7 pm.