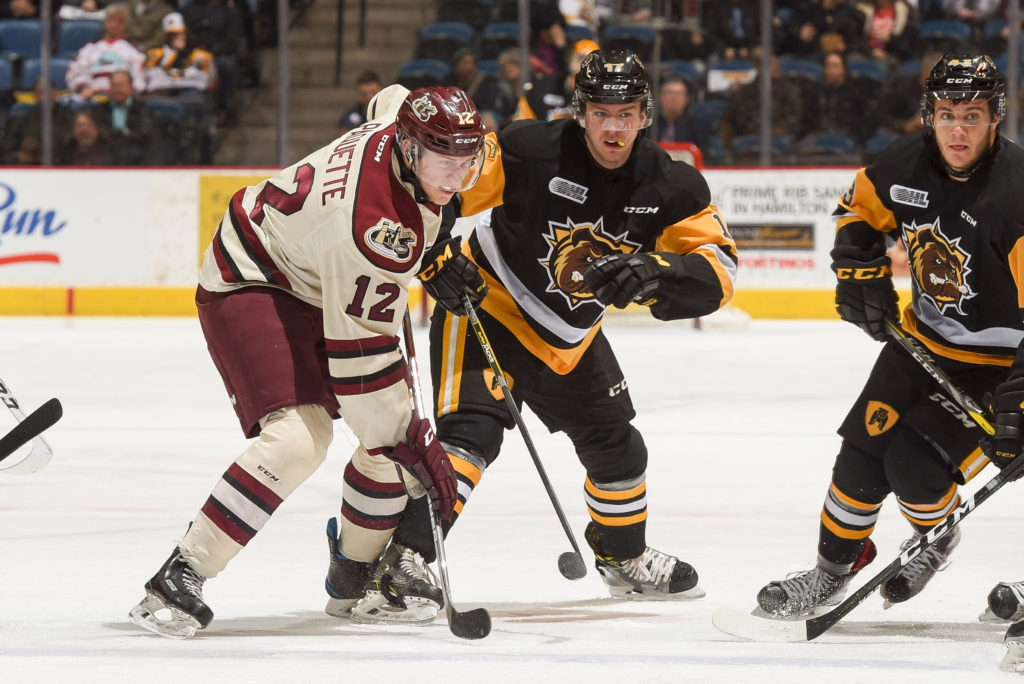 It wasn’t the way they wanted to clinch a playoff spot, but the Hamilton Bulldogs are in despite a 4-2 loss to the Peterborough Petes Friday night. The Bulldogs invitation to the Ontario Hockey League playoffs was made official after the North Bay Battalion lost 4-1 to Mississauga.

At FirstOntario Centre, the Petes capitalized on an early power-play opportunity to take a 1-0 lead midway through the opening frame. A Justin Lemcke (9) wrister found its way into the back of the net on a Bulldogs power-play to tie the game 1-1 with only 51.9 seconds remaining in the 1st period. Michael Cramarossa and Jack Hanley picked up the assists.

Peterborough scored twice in the 2nd period to jump out to a 3-1 lead. That was despite Hamilton outshooting the Petes 15-4.

Peterborough would add another goal early in the 3rd to extend their lead to 4-1. Connor Roberts (7) scored to cut the lead down to two at the 12:46 mark. Zach Jackson and Luke Kutkevicius got the helpers. The Bulldogs continued to push for more offense, but the comeback came up short.

1st star of the game went to Petes goaltender Scott Smith, who stopped 27 of the 29 Bulldogs shots. Peterborough’s Zach Gallant potted a goal and an assist, which was good enough to cement himself as 2nd star.  Christopher Paquette also had a goal and an assist to earn 3rd star honours.

Hamilton is back in action Saturday night as the Mississauga Steelheads visit FirstOntario Centre at 7 pm.