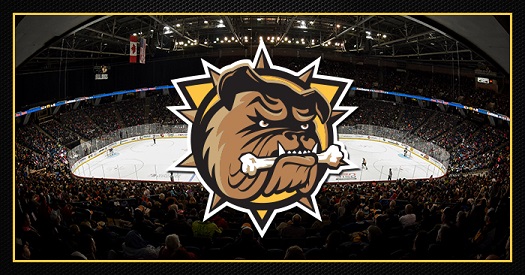 The Hamilton Bulldogs completed the weekend sweep with a last minute come from behind 4-3 win in North Bay Sunday afternoon.

The win over the Battalion gave Hamilton six out of six points after a 4-3 shoot-out win over Kingston at home Saturday night and a 3-2 win in Oshawa to start the weekend Friday night.

In the Gateway City, the Bulldogs led 1-0 after the 1st period on a Matthew Strome (3) goal. Hamilton’s power-play took advantage of a scramble near the Battalion net at 5:18 of the 2nd as Brandon Saigeon (6) banged it home to put the Bulldogs up 2-0. The North Bay offense seemed to wake up as they managed to cut the deficit to 2-1 before the middle frame ended.

The Battalion dominated the first fifteen minutes of the 3rd period and scored twice to take a 3-2 lead. Cue the Bulldogs heroics. First Reilly Webb (1) buried a wrist shot from the point that seemed to handcuff North Bay goalie Julian Sime at 18:19 to tie the game 3-3. For the Stoney Creek native, it was his first ever OHL goal. Then sixty-one seconds later at 19:20, Saigeon (7) let a quick shot go from the high slot for his second of the game to complete the comeback and hand Hamilton the 4-3 win.

Hamilton’s next game is Friday October 20th when they play the Storm in Guelph at 7:30 pm.