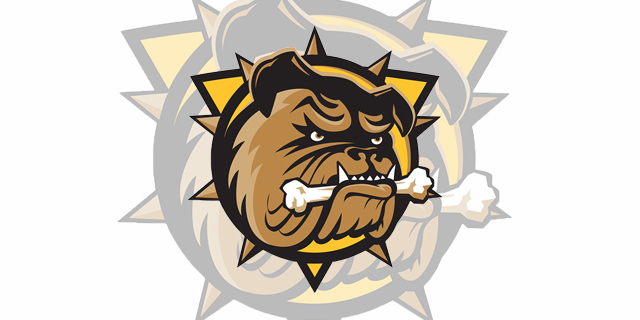 The Hamilton Bulldogs successfully opened the 2019-20 campaign with a thrilling 4-3 victory over the Sarnia Sting at the Progressive Auto Sales area in Sarnia.

The first period opened as a back and forth battle with the Bulldogs gaining an early 5 on 3 with Sarnia seeing penalties to Joseph Mack & Sam Bitten, though the Bulldogs didn’t convert thanks to Sting goaltender Ethan Langevin, the pressure and puck movement prowess would prove beneficial later in the contest. The Bulldogs would be tested on the PK later in the period with back to back successful kills but before the period was out Sam Bitten would strike with a tip of a point shot right in front of Bulldogs goaltender Zachary Roy to open the scoring with just 1:14 remaining in the frame.

The opening of the second period would prove far different for the Bulldogs with Kade Landry showing an incredible individual effort, before finding an open Arthur Kaliyev backdoor for his first of the season, tying the game. The Bulldogs would then see some adversity as first line centre Logan Morrison would be caught with a headshot by Sarnia’s Jamieson Rees, knocking Morrison out of the game and seeing Rees ejected for the head contact. The Bulldogs wouldn’t convert on the 5 minute major but shortly after Lawson Sherk would score his first in the Ontario Hockey League, on a great triangle passing play with Arthur Kaliyev starting the play, Jake Gravelle setting it on a tee and Sherk hammering it home. With just 1:58 to go before the period was out however, the puck would hop over Zachary Roy’s stick as he looked to move it up the boards and had Joseph Mack jump on it, feeding Brayden Guy to tie the game at 2.

The third period would see Zachary Roy take over, stopping both Eric Hjorth & Sam Bitten on breakaways before Tag Bertuzzi would block a Hjorth drive and break onto the puck himself before flipping a highlight reel one handed shot past Sarnia’s Ethan Langevin and into the net. The Bulldogs would then see another milestone moment, on a late power-play where Arthur Kaliyev would drag the puck around the front of net, forcing Langevin to vacate the crease and find an open Ryan Winterton for his first goal in the OHL. Joseph Mack would add a late goal for the Sting but it wouldn’t be enough to overcome the Bulldogs.

Arthur Kaliyev finished the game with a goal and a pair of assists for 3 points, while rookie Ryan Winterton collects his first game winning goal. Zachary Roy was strong in goal turning aside 28 of 31 Sarnia attempts to get the Bulldogs season started on the right footing.