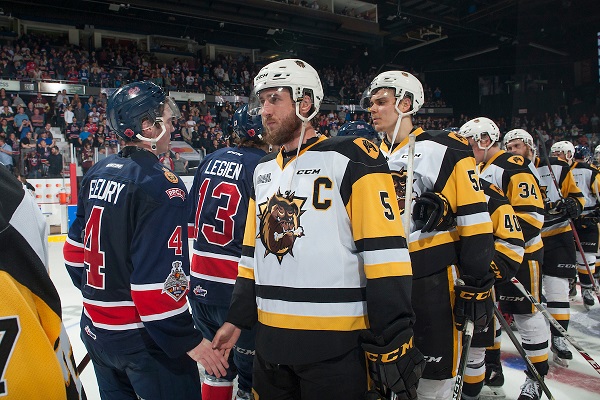 The Hamilton Bulldogs dream season came to an end Friday night as they dropped a 4-2 decision to the Regina Pats in the semi-final of the 100th Mastercard Memorial Cup.

Trailing 2-1 to start the third, the Bulldogs put in a desperate final 20 minutes, outshooting the Pats 22-5 but were unable to bridge the gap.

A physical 1st period saw both clubs fight for space in the early going but Regina put the first dent in the scoreboard to grab a 1-0 lead.

The Bulldogs pressed in the opening half of the 2nd when Nicolas Mattinen (1) tied the game 1-1. Regina responded just over two minutes later to take a 2-1 lead after 40-minutes.

Despite Hamilton carrying the third period play, the Pats found a way to pull ahead 3-1. The Bulldogs weren’t finished though as Will Bitten (1) responded just 1:13 later, but despite a desperate Hamilton push, the Pats found the empty net to make the final 4-2.

Blueliner Benjamin Gleason led the Bulldogs in tournament scoring with five points (1-4–5) while goalie Kaden Fulcher was among the statistical leaders in goaltending categories, posting a 2.27 goals-against average and .918 save percentage in four games.

OHL Academic Players of the Month for November
19 hours ago