BULLDOGS EMBARK ON 3 IN 4 WEEKEND 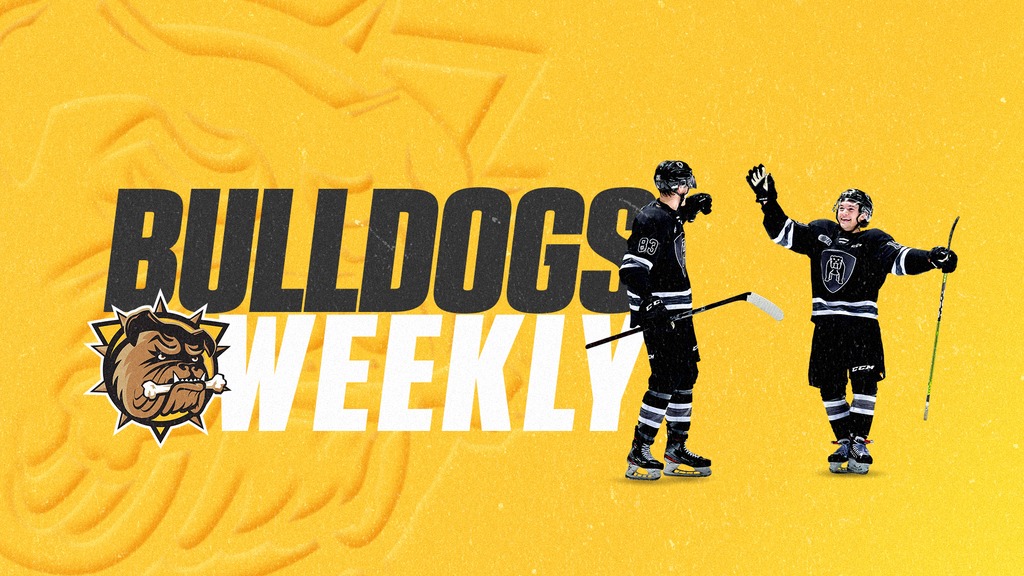 The OHL East Division leading Hamilton Bulldogs head to the Meridian Centre in St. Catharines on Thursday night to open a 3-in-4 weekend that will also see the Dogs host the Kingston Frontenacs on Saturday afternoon & visit the Generals on Sunday evening.

It will be the 4th meeting of the season between the Bulldogs & IceDogs and a chance for Hamilton to secure at least half of the K-9 Cup having won the previous 3 meeting, outscoring Niagara 14-4 and posting a pair of shutouts in the process. All three Bulldogs goaltenders that have appeared this season have had wins in the season series, with Marco Costantini, Tristan Malboeuf & Matteo Drobac all winning a game apiece, with Costantini & Malboeuf recording their first career OHL shutouts. Ryan Humphrey has been the biggest thorn in the side of the IceDogs this season recording a goal & 5 assists for 6 points in the 3 meetings followed closely by Logan Morrison (2-3-5), George Diaco (3-1-4) & Mark Duarte (3-1-4). The Bulldogs will be looking for their 8th straight victory over the IceDogs dating back to the 2019-20 season.

On Saturday afternoon the Bulldogs will renew their rivalry with the Kingston Frontenacs as the teams collide for the first time this season. Famously the Bulldogs & Frontenacs collided in both the 2017 & 2018 OHL Playoffs with Hamilton knocking off Kingston in 5 games in the 2018 Eastern Conference Championship winning the Bobby Orr Trophy for the first time in franchise history. Kingston enter Sunday’s game led by Burlington’s Shane Wright who is widely expected to be the #1 overall selection in the 2021 NHL Entry Draft. The Bulldogs stout defense, led by team captain Colton Kammerer and team plus/minus leader Jorian Donovan will be set to turn back the challenge on FirstOntario Centre Ice. Saturday’s game will also be an afternoon of Military Appreciation with the Argylls & Rileys playing their Christmas Classic Charity Hockey Game in the rink at noon, entry costs just a donation of a new, unwrapped toy going to City Kidz Charity.

The Bulldogs wrap up the weekend with a Sunday evening meeting with the Oshawa Generals. It will be the first meeting of the Bulldogs & Generals since opening night when the Bulldogs mounted a 3rd period comeback to win the first of four straight games to open the season. Logan Morrison & George Diaco led the way on opening night with a goal and assist each while Ryan Humphrey scored the game-winning goal with just 1:47 to play in the 3rd period.

Tickets for Saturday’s home game against the Kingston Frontenacs are available at Ticketmaster.ca with puck drop at 4:00pm.