BULLDOGS EXTEND WIN STREAK TO 5 WITH WIN OVER KITCHENER 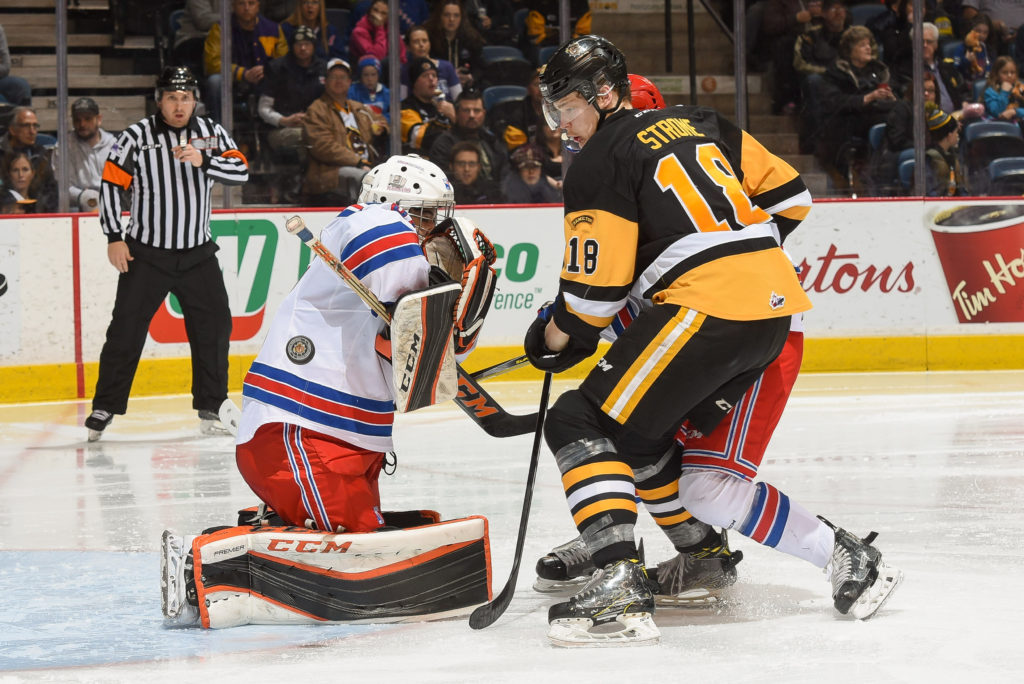 The Hamilton Bulldogs win streak is now at a season high five straight games as they defeated the Kitchener Rangers in front of a Family Day crowd of 7,087 Monday afternoon.

Brandon Saigeon (19) opened the scoring on the power-play at 5:45 after one-timing a beautiful feed from Benjamin Gleason to give the Bulldogs an early 1-0 lead. Matthew Strome picked up the second assist. Kitchener would tie the game up at 1-1 midway through the period only to see Connor Roberts (5) score from the slot at 15:34 to give the Bulldogs a 2-1 lead after the 1st period. Niki Petti and Zachary Jackson set up the play.

Marian Studenic (16) followed up on his own rebound, and gave the Bulldogs a 3-1 lead at 2:31 of the second period. Luke Kutkevicius and Jackson assisted on what turned out to be the game winning goal. Matthew Strome (30) picked up the puck in the crease, and walked around everyone and calmly deposited the puck into the net at 10:19 to make it 4-1 Hamilton. Will Bitten (19) made no mistake on a cross crease feed from Michael Cramarossa at 14:33 to put the Bulldogs up 5-1. Kitchener would get one back with 1:17 left in the frame to make it 5-2 after forty minutes.

There was no scoring in the third period as the Bulldogs locked it down playing a solid defensive period not giving Kitchener any chance of a comeback.

The Rangers got goals from Darby Llewellyn (19) and Jonathan Yantsis (2).

Marian Studenic was the first star of the game thanks to his game winning goal. Matthew Strome had a goal and an assist for second star honours while Zachary Jackson was named third star for his two assist performance.

Kitchener out-shot Hamilton 22-18, but Bulldogs goalie Dawson Carty kicked out twenty shots against his old team as he picked up his fifth straight win. Carty is now 10-4 since being acquired from Kitchener in late December.

The Bulldogs head out on a 3 game road trip later this week with stops in Barrie, Ottawa, and Kingston. Hamilton’s next home game is on Friday March 3rd, when they host the Peterborough Petes at FirstOntario Centre at 7:30 pm.