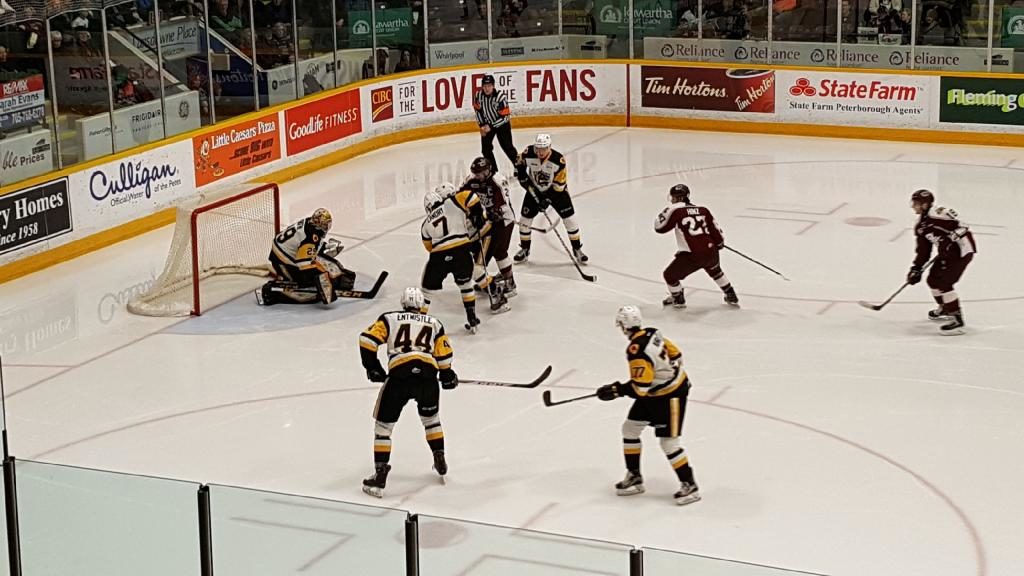 With a number of regulars on the sidelines resting for the playoffs, the Hamilton Bulldogs wrapped up their regular season with a 5-3 win in Peterborough Saturday night.

The two teams started at a good pace going 4:04 without a whistle to start the game, with the first stoppage after a Peterborough goal. The Bulldogs Marian Studenic (18, 19) then scored two in a row to give the Black and Gold a 2-1 lead. The Petes scored late as the 1st period ended 2-2.

Marian Studenic (20) completed his hat-trick with a short-handed goal at 8:09 of the 2nd period as Hamilton went up 3-2.  Ben Gleason (9) scored just over four minutes later to give the Bulldogs a 4-2 advantage heading into the final period.

Hamilton finishes the regular season with a record of 43-18-4-3.

The Bulldogs are still waiting to find out who their opponent will be in the 1st round of the OHL Playoffs. Mississauga and Ottawa each have 67-points and are in 7th and 8th place in the Eastern Conference standings with both teams playing on the final day of the OHL’s regular season tomorrow. Whoever ends up in 8th place will face Hamilton in Round 1 with Game 1 Thursday March 22nd at 7 pm at FirstOntario Centre.

For more information on how to get playoff tickets, call 905-529-8500 or go to www.hamiltonbulldogs.com