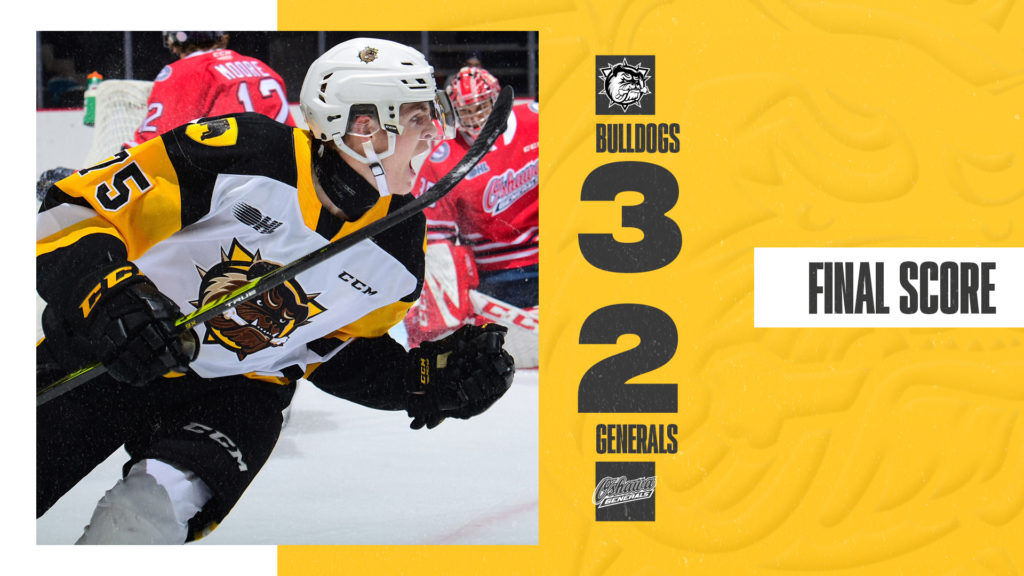 HAMILTON, ONTARIO. For the first time in 581 days the Hamilton Bulldogs returned to the ice to take on the Oshawa Generals at the Tribute Communities Centre on Friday night.

The opening period saw plenty of back and forth action with the Bulldogs outshooting the Generals by a 14-10 margin. Access to the middle of the Generals zone came freely to the Bulldogs with chances for Jan Mysak, Navrin Mutter, Logan Morrison, Lawson Sherk and Patrick Thomas but all were unable to best Generals netminder Patrick Leaver. Marco Costantini was not to be outdone however, stealing chances from both Ty Tullio & Brett Harrison in what was a scoreless, but exciting, first frame.

The second period would unfold much the same way as the first with the goaltenders taking centre stage. Patrick Leaver would stop 13 for the Generals including a point blank chance for Alex Pharand, while Marco Costantini would stop all 8 he faced with his best a sprawling save without his stick on Daniel Michaud. After 40 the game would stay the same as after 20, still awaiting the first goal.

The third period was an offensive explosion beginning with the Generals taking the lead through Callum Ritchie at 1:24 before George Diaco would take a Logan Morrison feed down the left side and shelving the puck to tie the game 1-1 at 2:47. The Generals would nose ahead again on a Ryan Stepian goal at 4:45 before Logan Morrison would deflect a Jan Mysak shot through Patrick Leaver at 5:32 to tie the game again. With time winding down George Diaco would feed Gavin White high in the offensive zone and the gifted defender would create a rebound that Ryan Humphrey would jump on, banking off Leaver from below the goal line to give the Bulldogs a 3-2 lead at 18:13, a lead the team would hold onto through a pair of miraculous late Marco Costantini saves to pickup the opening night win.