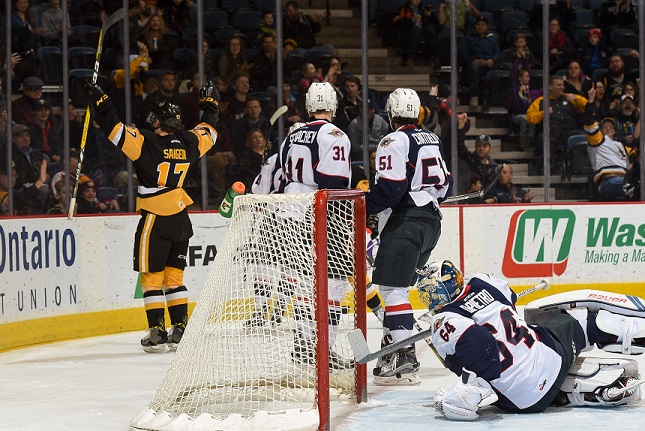 The Hamilton Bulldogs finished off their weekend with an impressive 6-3 win over the Windsor Spitfires at FirstOntario Centre Saturday night.

Not the start the Bulldogs were looking for as Windsor opened the scoring at the 8:27 mark of the 1st, but Marian Studenic (13) and Brandon Saigeon (13) scored twenty seconds apart to give Hamilton a 2-1 lead. Windsor would tie it 2-2 thirty-five seconds later, but on the power-play, Saigeon (14) got his second of the night late in the period to give Hamilton a 3-2 lead after the first.

Each team scored once in the second with the Bulldogs goal coming from Michael Cramarossa (16) as he helped his team to a 4-3 lead after two. However, the story of the second period was Hamilton goalie Dawson Carty who stopped sixteen of the seventeen shots he faced.

The 3rd period saw a great deal of end to end action, but no goals until the Bulldogs capitalized on a 5:00 minute major penalty handed to Windsor forward Jeremiah Addison. Matt Luff (18) and Brandon Saigeon (15) scored power-play goals, with Saigeon getting the hat-trick with an empty-netter to make the final 6-3.

The Bulldogs next game is in Peterborough on Thursday February 16th at 7:05 pm before they return to FirstOntario Centre on Saturday February 18th to host the Ottawa 67’s at 7 pm.