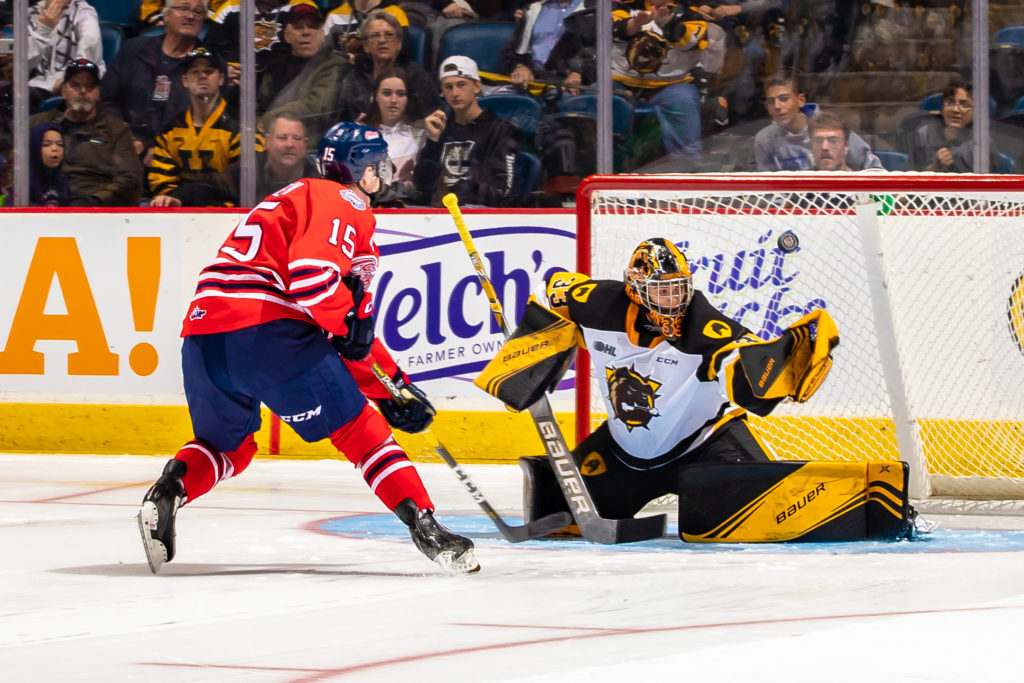 HAMILTON, ONTARIO. Marco Costantini was brilliant in goal once again stopping 36 of the 39 shots he faced, but the veteran Oshawa Generals rallied in the third period scoring a trio to take a 3-2 victory on home ice.

Hamilton wasted little time finding an offensive rhythm on Sunday evening, while shorthanded at 4:46 of the first period Jan Jenik would chase down a loose puck in the Generals zone, his initial shot was stopped but picking up his own rebound Jenik would find Arthur Kaliyev in front who would bury the opportunity, his 15th of the season, giving the Bulldogs a 1-0 lead. Special teams were the highlight of the first period as on the Bulldogs second power-play of the game they would pot their second goal, Nathan Staios would deal the puck to Arthur Kaliyev who’s shot would be tipped in by Logan Morrison for his 5th goal of the season at 7:50. Marco Costantini also wouldn’t be without his own heroics of the first frame, stopping Jacob Winterton on a breakaway as part of 12 saves in the period.

Penalties would be the storyline of the second period, before the second frame would close the Generals would be on their 7th power-play of the game with the Bulldogs turning them away at each turn. Generals’ Tye McSorely would lead the penalty parade on his team’s side, instigating a spirited tilt with Bulldogs’ power forward Navrin Mutter. By the end of the second period, Oshawa & Hamilton would combine for a total of 38 minutes in penalties on 17 total infractions. Despite the power-plays piling up against the Bulldogs, Marco Costantini would finish the second period with 21 saves on the night keeping the Bulldogs in a 2-0 lead.

The third period would provide controversy as Serron Noel would score his 4th of the season, running Bulldogs’ goalie Marco Costantini in the process and the puck only crossing the line after Costantini had been knocked into the back of the net. That would set the stage for the Generals comeback, Ty Tullio would pick up his 8th of the season after the Bulldogs had killed off the Generals 8th power-play of the night to tie the game at 2-2 at 11:52 before Kyle MacLean would give the Generals the lead shorthanded at 13:03, finding a gap in Costantini’s pads at 13:03. The Bulldogs would put one final push on to the finish but Nathan Staios attempted buzzer beater hit the back of the net just after the final whistle sounded. The Oshawa Generals would pick up the 3-2 victory after three unanswered 3rd period goals.

The Hamilton Bulldogs return to action on Wednesday, October 30th when the team hosts its’ first school day game of the season against the Barrie Colts at 10:30am.