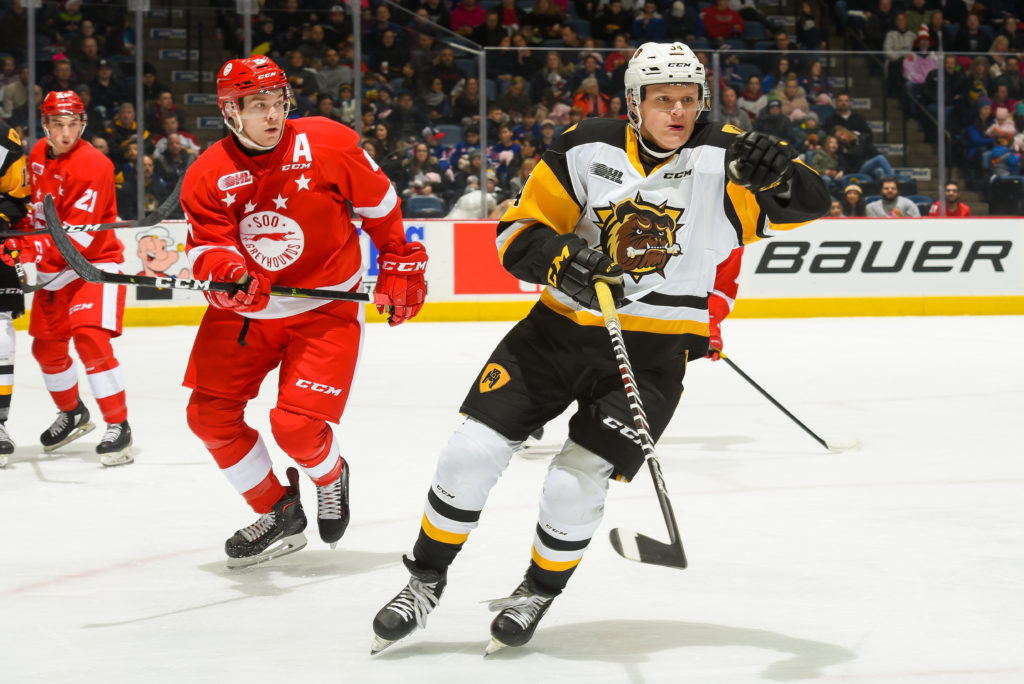 HAMILTON, ONTARIO. Two goals from Jan Jenik and 28 saves from Marco Costantini wouldn’t be enough as the Greyhounds found a final minute winner after Hamilton showed tremendous heart and fight to battle back into the game from two goals down twice.

The first period in Sault Ste. Marie did not unfold the way the Hamilton Bulldogs had envisioned, after an early Hamilton power-play produced a ton of zone time, it was the Greyhounds who found their offensive game. At 8:55, Rory Kerins recorded his 8th of the season on a delayed Hamilton penalty. Kerins arrived as the late man from the bench flying down the slot to beat Marco Costantini on a shot that just squeaked through the Bulldogs netminder. At 12:32, the Hounds would double the lead, Tye Kartye found defenseman Jacob Holmes whose one-timer found the back of the Hamilton goal, his first goal in the OHL. Costantini wouldn’t let the period expire without a little magic however as he robbed Alex Johnston who thought he had an open goal before Costantini’s blocker found it and elevated the puck out of play. The Bulldogs would have a 5-on-3 late in the period but some heroics from Bailey Brkin kept the score 2-0 entering the first intermission.

The Bulldogs showed more jump in the second period, and with Marco Costantini walling off the goal the Dogs were able to find a spark. George Diaco would start the play, getting the puck onto Mark Duarte in turn sliding the puck to Jan Jenik who would walk down the slot and beat Bailey Brkin with a dart to the top shelf for his 16th goal of the season and 10th point in his last three games. From there Costantini would come up massive once again, in a goal mouth scramble the Bulldogs would be called for a defender freezing the puck in the crease, which is an automatic penalty shot for the Greyhounds. Zachary Trott was chosen to take the opportunity, but as he tried to slide the puck between Costantini’s pads, Marco would slam the door shut once again, keeping the game at a 2-1 score heading to the locker room after 40 minutes.

The final frame as a back and forth, Tye Kartye would record his 7th of the season after a strong push from the Bulldogs to open the period, extended the lead to 3-1 at 5:58. Following that goal the comeback was on, first it was Avery Hayes passing to Tag Bertuzzi at the right point who walked in and ripped a shot on goal, the puck was dug out by Logan Morrison who would drag it around Brkin and lift it over the fallen Greyhounds netminder to make it 3-2 at 10:31. The Bulldogs would lock the game at 3-3 as on a late game power-play Arthur Kaliyev and Kade Landry would exchange the puck before Jenik would walk down the slot and beat Brkin for his 2nd of the night and 17th of the season. A point wasn’t in the cards for the Bulldogs on the night however as with a delayed call against the Bulldogs, Jacob LeGurrier would pinball a shot over Costantini for a 4-3 at 19:22, which the Hounds would hang onto and take the win.

The Hamilton Bulldogs will finish the team’s three game northern road trip in Sudbury on Sunday, November 17th at 2pm.