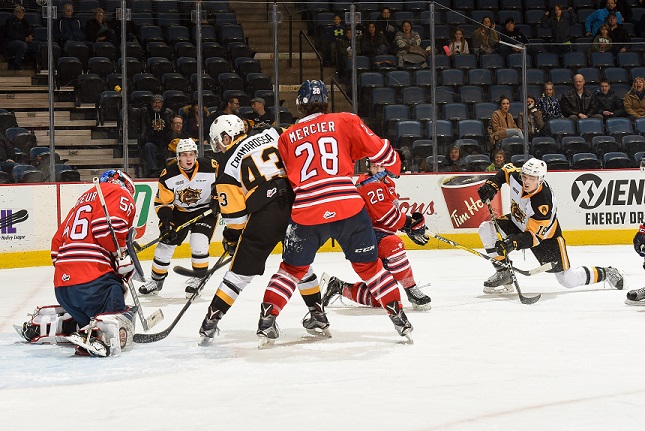 The Bulldogs were hoping to send a message to the first place Oshawa Generals Friday night, but instead the visitors left with a 2-1 win and a nine-point lead over Hamilton in the Eastern Conference standings

The two teams traded chances in the first period and the Bulldogs were hoping to get their offense in gear when they went on the power-play. However, some miscommunication led to a turnover and the Generals took advantage as Jack Studnicka scored short-handed at 15:56 giving Oshawa a 1-0 lead.

Not a great start to the second period for the Bulldogs as they gave up a power-play goal at the 4:00 mark as Mitchell Vande Sompel made it 2-0 Generals. A great shift by Niki Petti, Matthew Strome and Will Bitten eventually led to a goal from Petti (6) that cut the Oshawa lead to 2-1.

Hamilton was all over the Generals in the third period, thanks mainly to two separate 5 on 3 advantages, but they couldn’t find a way to beat goaltender Jeremy Brodeur. Defenseman Ben Gleason had the fans on their feet as he made three outstanding plays to keep the puck in the Oshawa end, but his efforts went unrewarded. There was no scoring in the third as the Bulldogs record on their seven game home stand drops to 1-3.

Jeremy Brodeur stopped 32 of the 33 shots he faced and was named the game’s first star.

The Bulldogs were 0-7 on the power-play and are now 0-26 in their last seven games.

It’s right back to the rink Saturday night as the Bulldogs play host to the Kingston Frontenacs at 7 pm.