BULLDOGS LOSE 3-2 TO ICEDOGS IN A SHOOT-OUT 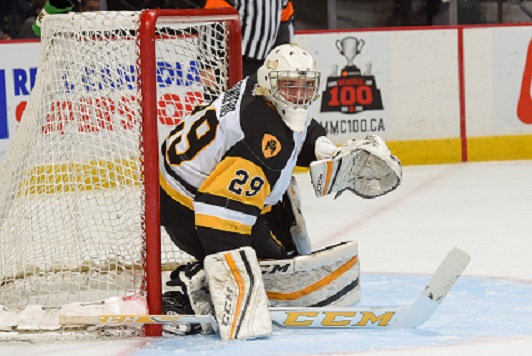 The Hamilton Bulldogs are still looking for their first win on home ice after dropping a 3-2 decision in a shoot-out to the Niagara IceDogs on Saturday night.

In front of rookie goalie Nick Donofrio making his OHL debut, the Bulldogs came out with plenty of pressure early and it paid off as Brandon Saigeon (1) scored his first goal of the season depositing a perfect pass from Owen Burnell at 1:18 to take a 1-0 lead. Justin Lemcke picked up the other assist on the only goal of the period.

Hamilton got a good start to period two as Brandon Saigeon (2) scored his second of the night to give the Black and Gold a 2-0 lead. TJ Fergus and Will Bitten picked up the assists on the power-play goal, the Bulldogs first of the season that snapped an 0-for-16 drought with the man advantage. However, the rest of the period was dominated by the IceDogs. They scored on the power-play at 9:07 to cut the Hamilton lead to 2-1 and then again at 17:25 to send the two teams to the dressing rooms tied 2-2.

There was no scoring in the third period or in overtime, so for the third straight game the Bulldogs needed a shoot-out to decide a winner. All three Hamilton shooters (Saigeon, Kaliyev and Bitten) were stopped by Niagara goalie Stephen Dhillon while IceDogs sniper Akil Thomas scored the game winner for the visitors.

The Bulldogs are back in action Monday afternoon as they play a Thanksgiving matinee in Sarnia at 2 pm.