BULLDOGS LOSE 4-3 IN A SHOOT-OUT TO SAGINAW 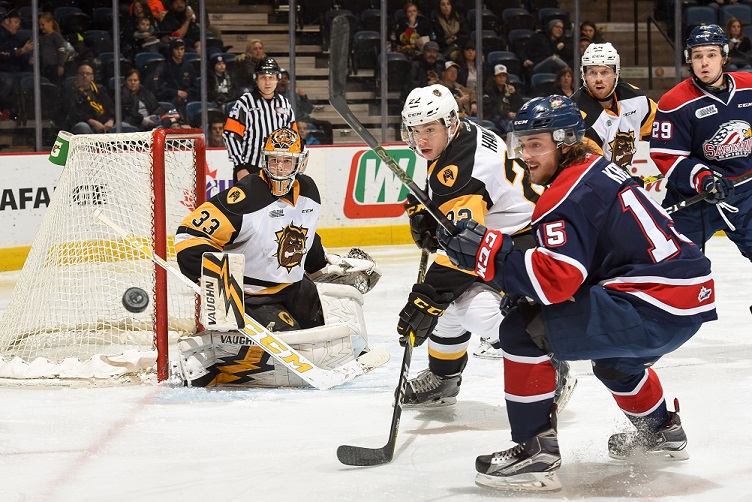 On a night when the teddy bears were tossed on the ice for a good cause, the Hamilton Bulldogs were again on the wrong end of a one goal game losing to the Saginaw Spirit 4-3 in a shoot-out.

The game got off to a great start for the Bulldogs as Connor Walters (2) scored to make it 1-0 at 7:16. The goal was the signal for the fans to throw their stuffed animals on the ice for the annual Teddy Bear Toss. However, the celebration was short lived as after the bears were cleaned off the ice, Saginaw needed only one minute to tie the game 1-1 at 8:16. Hamilton kept the pressure on with Will Bitten (7) converting on the power-play at 11:14 to make it 2-1 with Matthew Strome and Ben Gleason picking up the assists.

After a tight-checking, scoreless 2nd period, the Spirit scored twice in the third to take a 3-2 lead. However, just when it seemed like Saginaw would win in regulation, Will Bitten (8) crashed the crease and scored his second of the night at 19:19 to force the game to overtime tied at 3-3. Adam Laishram and Michael Cramarossa got the assists.

Despite great chances by Niki Petti and Will Bitten, overtime solved nothing sending the game to a shootout. Filip Hronek was the hero for the Spirit as the only player to score in the skills competition as Petti, Matthew Strome and Ben Gleason failed to beat Saginaw goalie Evan Cormier.

The Bulldogs are right back at it Sunday afternoon when they host the Sault Ste. Marie Greyhounds at FirstOntario Centre at 2 pm.

Bulldogsshop Jan Mysak
Show your support for #19
19 hours ago