Bulldogs Lose 4-3 (SO) to Kingston 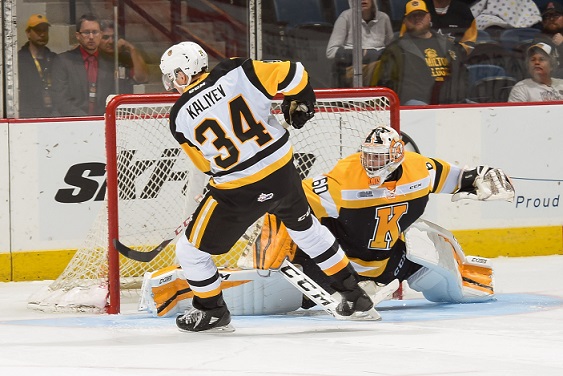 The Hamilton Bulldogs finished up a very busy weekend, that saw them take five out of a possible six points, with a 4-3 shoot-out loss Sunday afternoon to the Kingston Frontenacs.

The Bulldogs got a good start doing something they haven’t done all season by scoring a first period goal. Will Bitten (1) converted an Arthur Kaliyev pass at the :23 second mark to give the home team a 1-0 lead.

Kingston got a short-handed goal at 12:04 of the second period to tie the game 1-1, but Arthur Kaliyev (1) scored his first ever OHL goal at 15:40 to give the Bulldogs the lead back at 2-1. Matthew Strome and Will Bitten picked up the assists as the second period ended 2-1 in favour of Hamilton.

The Frontenacs again fought back at :24 seconds into the third period to tie the game at 2-2. Another Bulldogs milestone took place as Owen Burnell (1) scored his first OHL goal at 12:56 to give Hamilton a 3-2 lead. Connor McMichael and Isaac Nurse set-up the play. However, Kingston just wouldn’t go away as they scored at 15:39 to tie the game 3-3 and send it to overtime.

The extra period would solve nothing as the Bulldogs went to a shoot-out for the second straight game. Unlike Saturday night in Barrie, the Black and Gold were unable to score in the skills competition as Kaliyev, Bitten and Strome were all stopped by Kingston goalie Jeremy Helvig while Frontenacs sniper Jason Robertson was the only Frontenac to score on Kaden Fulcher.

After the weekend, the Bulldogs season record is 2-1-0-1 while Kingston improves to 4-1.

The Bulldogs are back in action on Saturday October 7th as they host the Niagara IceDogs at FirstOntario Centre at 7 pm.