BULLDOGS LOSE 4-3 TO MISSISSAUGA IN A SHOOT-OUT 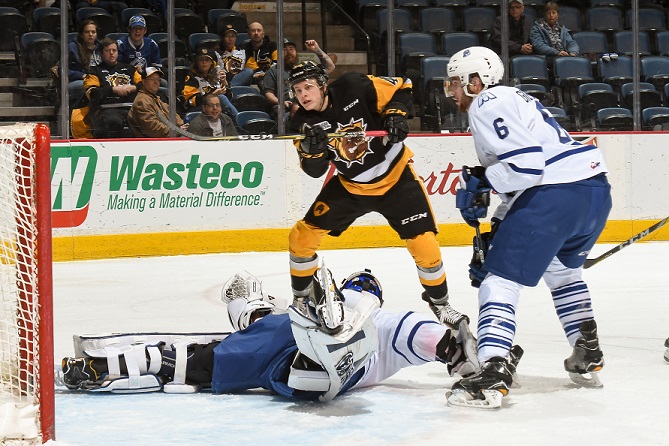 The Hamilton Bulldogs mounted a third period comeback, but ended up losing to the Mississauga Steelheads 4-3 in a shoot-out Saturday night at FirstOntario Centre.

The Steelheads opened the scoring with the only goal of the 1st period as they capitalized on a partial breakaway at 10:52. The Bulldogs controlled the play for most of the period out-shooting the Steelheads by a count of 14-7

Hamilton got on the board early in the 2nd period with Michael Cramarossa (19) banging home a loose puck just fifteen seconds in. Will Bitten and Brandon Saigeon picked up the assists on the play. However, the Steelheads scored two quick ones to take a 3-1 lead. The first came on a 5-on-3 power-play at 14:05 with the second at 16:27.

Kaden Fulcher came in to replace Dawson Carty in the Hamilton net to start the third period. Carty gave up three goals on fifteen shots.

The Bulldogs had Mississauga on the ropes for most of the 3rd period which led to a Mackenzie Entwistle (12) goal at 10:53 as he cut into the slot and fired one into the top corner to make it 3-2. Reilly Webb was credited with the assist to record his first ever OHL point. Connor Roberts (8) finished off a pretty cross crease feed from Niki Petti to tie the game at 3 at 14:46. Matthew Strome picked up the second assist. Hamilton came close to taking the lead as they out-shot the Steelheads 17-4, but the game was forced to overtime.

Again, the Bulldogs controlled the play, but there was no scoring in O-T as the game would be decided in a shoot-out.

All three Hamilton shooters (Michael Cramarossa, Matthew Strome and Niki Petti) failed to score in the skills competition. The only Steelhead to beat Kaden Fulcher was Spencer Watson, even though it appeared the puck went off the cross-bar and stayed out. But after a video review, it was called a good goal.

The Mississauga goal scorers in regulation were Owen Tippett (40, 41), and Spencer Watson (25).

Owen Tippett’s 2 goal performance earned him the 1st star honours. Mississauga goaltender, Jacob Ingham, was named the 2nd star thanks to his 44 save performance. Mackenzie Entwistle earned 3rd star after scoring the goal that spurred the comeback.

The Bulldogs left right after the game as they wrap up the weekend in North Bay against the Battalion Sunday afternoon at 2 pm. Hamilton’s next home game is Saturday March 11th as they host the Peterborough Petes at 7 pm.