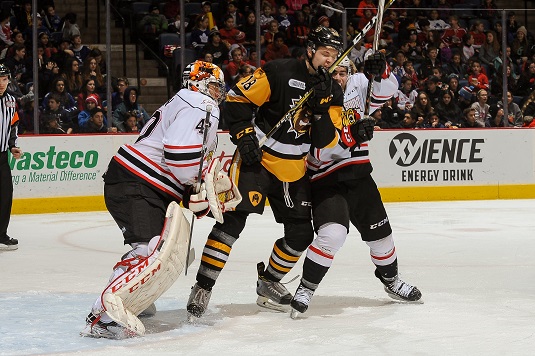 The Hamilton Bulldogs found out first hand on Wednesday why the Owen Sound Attack have been one of the hottest teams in the O-H-L the last few weeks.

The Attack, who just recently had a 15-game winning streak, downed the Bulldogs 5-2 in front of 8,396 fans during the School Day game at FirstOntario Centre.

Hamilton got off to a good start by taking a 1-0 lead at 12:46 of the first period thanks to Michael Cramarossa (15). However, Owen Sound tied it up 1-1 before the period ended.

The Attack scored two power-play goals in the second period and led 3-1 after forty minutes.

Bulldogs starting goalie Kaden Fulcher was pulled at the end of the second after allowing 3 goals on 12 shots. He was replaced by Dawson Carty who was beaten on the first shot he faced early in the third as the deficit increased to 4-1. Niki Petti (13) made it 4-2 at the 5:13 mark, but Owen Sound scored shorthanded to make the final 5-2.

The loss, the Bulldogs third in a row and six of their last seven, drops their season record to 23-23-3-2.

Hamilton is back in action Friday night as they travel to Mississauga to take on the Steelheads before returning home to face the Windsor Spitfires Saturday night at FirstOntario Centre at 7 pm.