BULLDOGS LOSE TO KINGSTON 3-2 IN A SHOOT-OUT 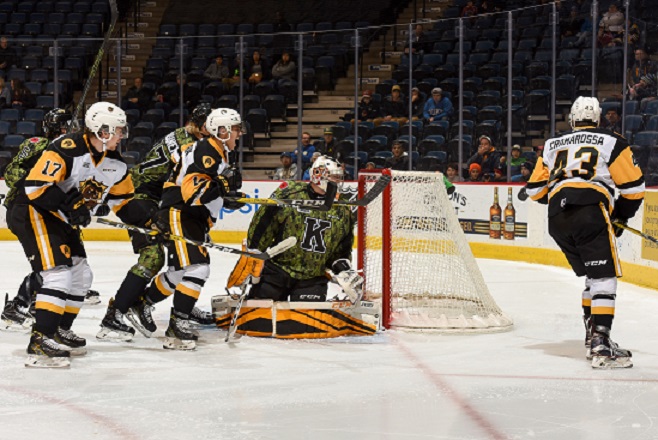 The Hamilton Bulldogs were involved in their sixth straight one goal game Saturday night and came out on the wrong end of a 3-2 shoot-out decision to the Kingston Frontenacs.

The two teams played a lot of the first five minutes in the neutral zone as both teams had a hard time breaking into the offensive end. However, rookie Zachary Jackson burst over the Kingston blueline, worked the puck in front of the net and after Niki Petti came close to opening the scoring, Will Bitten (6) banged home a rebound to give the Bulldogs a 1-0 lead at 6:08. Jackson and Petti picked up the assists.

The Bulldogs carried the momentum into the second period and peppered shots on the Kingston net. They took a 2-0 lead and put an end to an 0-for-26 power-play drought when Michael Cramarossa (10) found the back of the net at 2:52 with the assists going to Adam Laishram and Justin Lemcke. The Frontenacs were on their heels for most of the period until they got their chance of the power-play with Ted Nichol cutting the Bulldogs lead to 2-1 at 16:46. Less than three minutes later Kingston tied the game 2-2 when Jacob Paquette’s shot from the point beat Kaden Fulcher at 19:30. That sent the game into overtime.

There was no scoring in the extra period so a shoot-out was needed to decide a winner. Frontenacs goalie Jeremy Helvig stopped both Matthew Strome and Michael Cramarossa while Jason Robertson and Linus Nyman beat Fulcher for the win.

The Bulldogs are back in action on Saturday December 10th as they play host to the Saginaw Spirit at FirstOntario Centre at 7 pm.