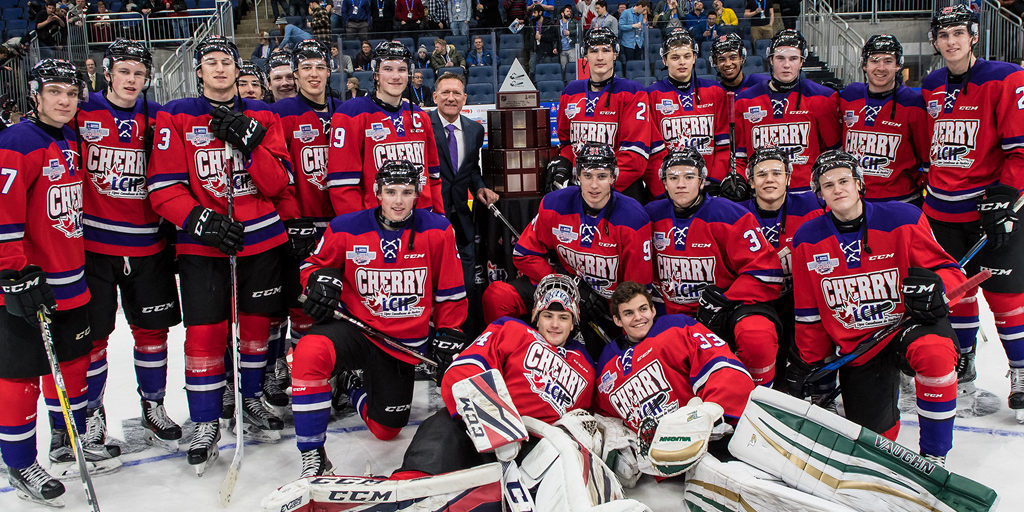 Team Cherry is back in the win column for the first time since 2010, ending a six year drought at the Sherwin-Williams CHL/NHL Top Prospects Game with a 7-5 win in front of 9,707 at Centre Videotron in Quebec City.

The two sides combined for a record-tying 12 goals, equaling totals from 1996, 2005 and 2008 as offensive talent and creativity flowed freely under head coaches Simon Gagné and Guy Chouinard.

Portland Winterhawks defenceman Henri Jokiharju earned Player of the Game honours for Team Cherry, recording three assists in the win while Halifax Mooseheads star Nico Hischier received the honours for Team Orr with a goal and two assists to his credit.

“That was a lot of fun, I’d love to play with guys like that every night,” said Jokiharju post-game. “I really enjoyed playing with (Antoine) Crete-Belzile (Blainville-Boisbriand Armada). I feel like we were on the same page all night and played really well together.”

Player of the Game honours can’t hurt your status ahead of draft day, but Jokiharju had other things on his mind.

“I wasn’t really thinking about it that way,” he said. “I just wanted to make the most of my opportunity and it turned out to be a really awesome night.”

Brandon Wheat Kings forward Nolan Patrick finished the night with two assists in the win. After recently being listed as the top draft eligible North American skater in NHL Central Scouting’s Midterm Rankings, the Winnipeg native was pleased with his effort.

“I thought I got better as the game wore on and I really liked my linemates,” he said. “It’s intense, everyone is trying to showcase themselves, but it was also a lot of fun and it was nice to get the win.”

Teams combine for #SWTP record-tying 12 goals as Team Cherry back in win column for first time since ’10.

The goals came early and often in the opening period as offensive talent rose to the surface.

Cherry and Orr were all square with 11 shots apiece to start the second before an offensive explosion ensued.

Team Orr came out of the gate with gusto as Hischier was sent in alone on a pass from Nikita Popugaev (Prince George Cougars) before converting on a nifty backhand deke to put Team Orr ahead 3-2.

MacKenzie Entwistle would answer back just nine seconds later though, snapping a shot into the back of the net after Team Cherry controlled the centre ice faceoff. Jokiharju found an open Entwistle who sent a hard release past Alex D’Orio (Saint John Sea Dogs).

Tied 3-3, another pair of bang-bang goals would keep the game tied in the eighth minute of the second frame.

Team Cherry’s Ian Scott (Prince Albert Raiders) turned aside 13 of the 17 shots he faced while D’Orio made 15 saves on 19 shots.

Michael DiPietro was greeted by teammate Gabriel Vilardi just over six minutes into his time in the crease as his Windsor Spitfires teammate stuffed a rebound underneath his pad from close quarters to give Team Cherry a 5-4 lead after two periods.

The seven second period goals between the two clubs was the most in one period at the Sherwin-Williams CHL/NHL Top Prospects Game since 1996 when eight found the back of the net in the third period at Maple Leaf Gardens in Toronto.

The offensive pace slowed in the opening half of the third before Mississauga Steelheads winger Owen Tippett took out an insurance policy on the Team Cherry lead, hooking up with Patrick and Cal Foote (Kelowna Rockets) on the power play at 11:28.

Down a pair of goals and desperate to draw even, Team Orr pulled DiPietro with over two minutes left on the clock and the move paid dividends.

With the extra attacker on the ice, Brandon Wheat Kings forward Stelio Mattheos sent a quick release over the shoulder of Team Cherry netminder Stuart Skinner (Lethbridge Hurricanes) to bring his team within a goal down 6-5.

A Jake Leschyshyn (Regina Pats) empty netter would seal the deal for Team Cherry though, ending their six year drought in a 7-5 final.

Skinner turned aside 17 of the 18 shots he faced in relief to record the win in goal while DiPietro made 14 saves for Team Orr.

Team Cherry had a slight edge on the shot clock, outshooting Team Orr 36-35 while going 3-for-4 on the power play.

Team Cherry improves to an all-time record of 6-13 at the Sherwin-Williams CHL/NHL Top Prospects Game on a night where the goals kept coming and the CHL’s top young prospects left it all on the ice.