BULLDOGS MOVE INTO 1st PLACE WITH 4-0 WIN OVER PETERBOROUGH 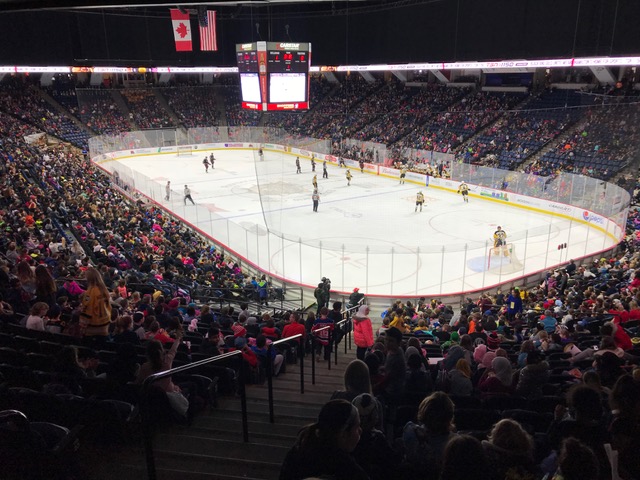 In front of an enthusiastic crowd of over 8,300 kids at the annual School Day Game at FirstOntario Centre on Wednesday, the Hamilton Bulldogs shut-out the Peterborough Petes 4-0.

With the win, the Bulldogs fifth in a row, Hamilton moves into 1st place in the East Division and into a tie for top spot in the Eastern Conference.

The thousands of cheering school kids from the Hamilton Wentworth District School Board gave the Bulldogs some jump, and while the Petes weathered the storm for a few minutes, Arthur Kaliyev (7) scored on the power-play at 10:56 to give the home side a 1-0 lead after the opening period.

Peterborough had some sustained pressure at the start of the 2nd period, but again came away empty handed.  Instead, Connor Roberts (3) got a shot away through a crowd at 4:51 to give the Black and Gold a 2-0 lead after 2.

The Bulldogs went into shut-down mode in the 3rd period consistently frustrating the Petes. Hamilton put a stranglehold on the game as Brandon Saigeon (10) connected on the power-play at 9:20 to make 3-0 with Isaac Nurse (5) putting the exclamation point on this one with a goal at 12:47 to make the final 4-0.

Hamilton’s Kaden Fulcher got the win picking up his 3rd shut-out of the season.

With the win, the Bulldogs take over 1st place in the East Division by improving their record to 11-5-1-3.

The Bulldogs now head out on the road for two tough divisional games, Friday night in Kingston and Saturday afternoon in Ottawa.