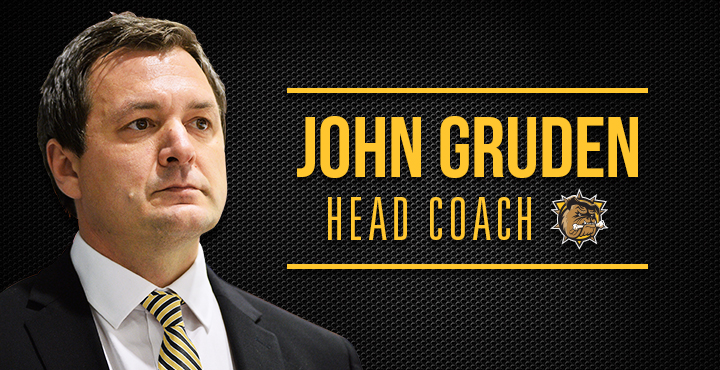 “After an extensive search, I am pleased to announce John Gruden as the Hamilton Bulldogs’ new Head Coach,” stated Staios. “It was clear to me that John’s values and goals best aligned with what our organization holds in high regard. His background, competiveness and character are a tremendous asset for our team.”

Gruden, a native of Virginia, Minnesota, spent last season as Head Coach of the OHL’s Flint Firebirds, his first season in the league. Prior to the 2015-2016 season, Gruden was an Assistant Coach with the United States National Team Development Program (USNTDP) for four years where he developed some of the United States’ top young hockey talent. Gruden began his coaching career as a high school hockey coach in Michigan and spent five years with the Little Caesars and HoneyBaked hockey clubs.

“I want to thank Steve Staios and Michael Andlauer for providing me with the opportunity to join an organization as respected as the Hamilton Bulldogs and continue my head coaching career in the OHL,” said Gruden. “I am really looking forward to getting started and working with the excellent group of young players we have to achieve success both on and off the ice.”

Prior to entering the coaching ranks, Gruden enjoyed a 10-year professional career as a defenceman that included 92 games in the National Hockey League with the Boston Bruins, Ottawa Senators and Washington Capitals. Gruden’s playing career also included time in the American Hockey League (AHL) for 175 games, the International Hockey League (IHL) for 219 games and the Deutsche Eishockey Liga (DEL) for 38 games.