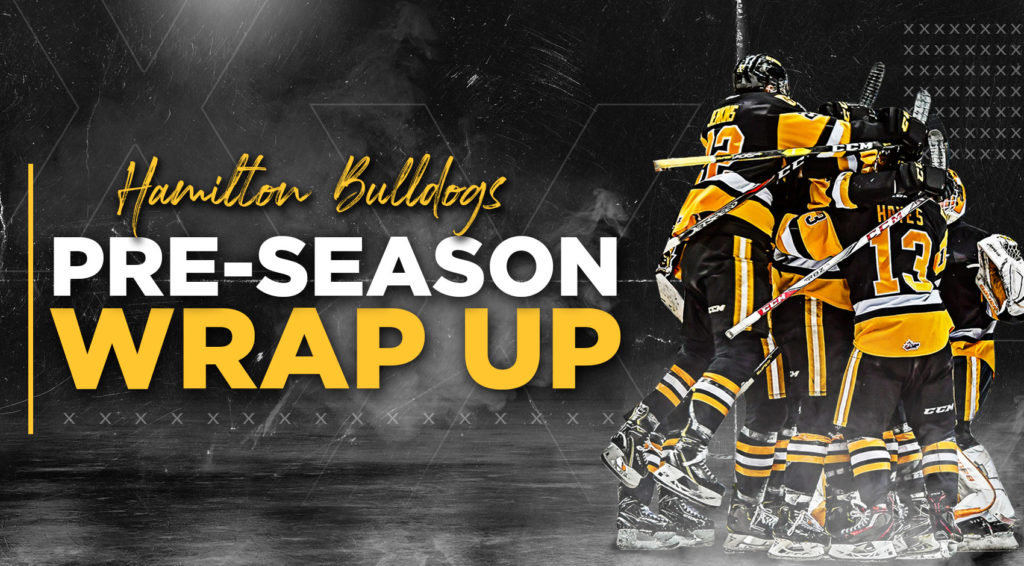 With September 20th and the opening of the 2019-20 OHL season just around the corner, the Hamilton Bulldogs successfully wrapped up their pre-season slate with a 5-4 shootout victory over the Guelph Storm at the Dave Andreychuk Mountain Arena in Hamilton, splitting their two game home & home set with superb sophomore Logan Morrison recording the shootout winner.

The Bulldogs opened their pre-season on August 31st with a forgettable 8-0 loss in Erie as the young team began to get to know one another. The following night however they would erase thoughts of that loss with a 2-1 victory over the same Erie Otters team, which saw Marco Costantini shine, turning aside 39 shots in his first action with the Bulldogs.

Following the back to back in Erie, the Bulldogs would next be in action on September 13th in Guelph, where again a young Bulldogs team would see their ups & downs as a bevy of young talent attempted to catch the eye and earn a spot on the roster. Hamilton would drop a 4-2 decision but bright spots were there in the form of goals from Liam Van Loon and Cameron Supryka, both shorthanded, along with the efforts of Tag Beruzzi who put 4 shots on net in the contest and brought his physical brand of hockey to the forefront.

When the home & home with Guelph resumed on September 14th in Hamilton, it was Logan Morrison & Navrin Mutter who would take starring roles. Both Bulldogs forwards would record a goal and an assist in the game with Morrison ending the game showing his slick one on one skills.

As the team’s first regular season in Sarnia closes in on the calendar, it was very positive to see both rookies and veterans alike take moments in the spotlight in the pre-season with the aforementioned likes of Supryka, Bertuzzi, Van Loon, Morrison & Mutter all making impacts while newcomers Costantini, Lawson Sherk, Ryan Winterton & Gavin White all did their part to impress and make the decisions for the opening night lineup as tough as we’ve seen in the team’s 5 years in Hamilton.

The Hamilton Bulldogs begin the 2019-20 season on September 20th in Sarnia, before returning for the team’s Home Opener on Saturday, September 21st at 7pm against the Erie Otters.