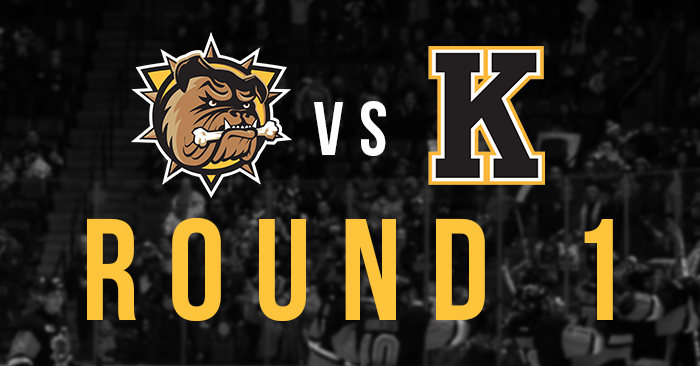 The Hamilton Bulldogs took a 2-0 series lead with a pair of road wins to open the series before the Frontenacs hit the road and promptly returned the favour in Hamilton. Kingston took a 3-2 series lead in Game 5 on home ice before the Bulldogs returned home on Sunday to send the series to Game 7 with a 5-2 victory.

The OHL’s lowest scoring team, the Frontenacs have managed to open things up a little and score 19 times over six games. Rookies Nathan Dunkley and Linus Nyman have joined sophomores Jason Robertson and Brett Neumann in leading the attack.

A much older, more experienced group, Hamilton has relied on veterans Niki Petti, Matt Luff and Will Bitten who have three goals each while 2017 NHL Draft prospect Matthew Strome leads the team with eight points (1-7–8).

Petti and fellow veteran Michael Cramarossa prepare for the second Game 7 of their five-year careers after being part of a run to the Eastern Conference Final with the Belleville Bulls in 2013 before falling in Game 7 to the Barrie Colts.

Fast starts are often imperative in Game 7 scenarios. The Frontenacs are on home ice and have outscored Hamilton in first periods 9-2 in the series. Make of that what you will as these two closely matched Eastern Conference opponents settle things once and for all tonight in Kingston.

The Belleville Bulls defeated the Kingston Frontenacs in their lone Game 7 meeting in 1990. In that series, the Bulls and Frontenacs played the longest game in OHL history, lasting four overtimes and a total of 123:51 before Belleville’s Ken Rowbotham scored the game winner.