BULLDOGS TAKE A POINT BUT HOEFENMAYER HAT-TRICK ENDS THE TRIP 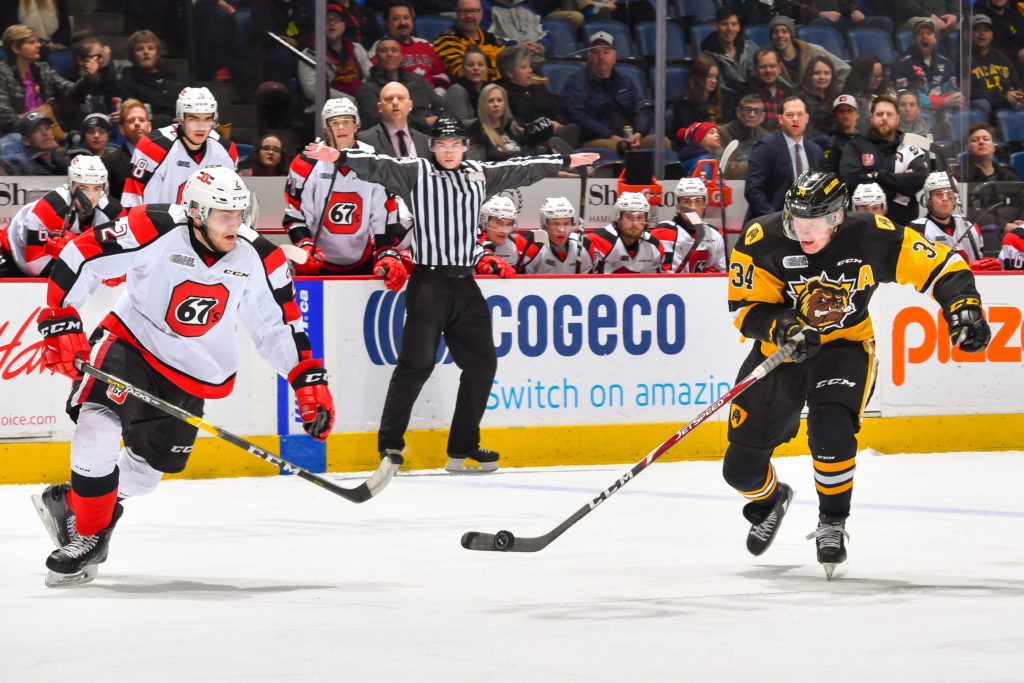 HAMILTON, ONTARIO. It was a blue collar effort for a young Hamilton Bulldogs lineup at the end of a three game eastern road swing but a hat-trick from Ottawa 67’s defenseman Noel Hoefenmayer, including the overtime winner, held the Bulldogs to a point after a tremendous back and forth game.

Nathan Staios opened the scoring at TD Place arena in Ottawa at 13:01 of the first period, when he jumped into the middle of the rush in the 67’s zone, taking a feed from Logan Morrison and scoring his 1st goal of the season & 1st as a member of the Hamilton Bulldogs. The Staios’ goal was against the run of play for the period as Bulldogs goaltender Marco Costantini was outstanding, stopping 12 shots in the 1st period. The one that eluded Costantini was the first of the night for Hoefenmayer, who fired a seeing eye shot through a crowd in front of the Bulldogs net which found the twine at 18:08 to send the teams to the locker rooms after 20 tied 1-1.

The second period was all Bulldogs, at 7:05 Arthur Kaliyev would score his 14th of the season on the power-play when Jan Jenik found Logan Morrison at the side of Will Cranley’s goal, Morrison would walk out front and have his stuff attempt turned aside but Kaliyev came off the right circle to find the back of the goal. Just 18 seconds after Kaliyev’s goal, Navrin Mutter would bury his first of the season off a Liam Van Loon stretch pass, Mutter held off a 67’s defender and on his backhand went bar down giving the Bulldogs a 3-1 advantage they would take to the locker room after 40 and chasing Cranley in the process.

The third period was a wild affair on its own. Ottawa would take advantage of an early frame 5-on-3 with Noel Hoefenmayer scoring his 2nd of the night on another bullet from the point at 5:18. The 67’s would feed off the momentum back to back tic-tac-toe goals from the combination of Marco Rossi, Austen Keating & the debuting Joseph Gareffa at 9:27 & 10:58 would give the 67’s a sudden 4-3 lead. Avery Hayes would even the score, stealing the puck from Ottawa defender Nikita Okhotyuk and striking the back bar behind Cedric Andree.

Overtime was a back & forth but it was Noel Hoefenmayer’s strike at 2:45 of the extra period, his 3rd of the game that gave the 67’s a dramatic 5-4 win. Spoiling a 31 save performance by Marco Costantini.

The Hamilton Bulldogs return with three games next weekend, visiting the Niagara Ice Dogs on October 25th at 7pm, hosting the Oshawa Generals at 4pm on the 26th & visiting Oshawa at 6:05 on the 27th.