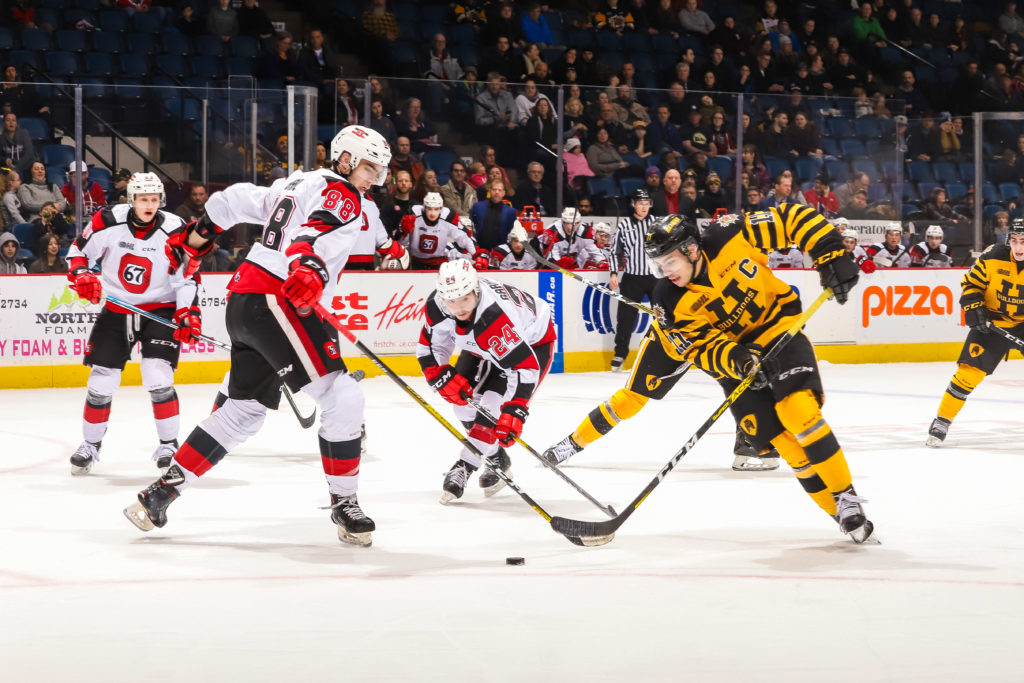 HAMILTON, ONTARIO. The Hamilton Bulldogs gave their best but a late charge from the Ottawa 67’s wouldn’t let the Dogs capture two points. Two spectacular saves from Marco Costantini would highlight the game but a disputed five-minute major in the third period would help shift momentum at a key point in the contest to Ottawa who would get a pair of late goals from Noel Hoefenmayer to tie the game in the third and win it in overtime in a 5-4 thriller.

Opening the game against the Ottawa 67’s, the Hamilton Bulldogs would get a potential save of the year from Marco Costantini as he dove left to right across his goal with Joseph Gareffa looking at an open net, as Gareffa let his shot go, Costantini would extend the paddle of his stick to deny Gareffa the goal in a save that had to be seen to be believed. The Bulldogs would feed off that momentum as the Bulldogs top line would get possession in the Ottawa zone with Jan Mysak pushing the puck from the slot to Payton Vescio at the right point, Vescio in turn fired a slap-pass to the front of Ottawa’s net picking up a tip from Logan Morrison and beating Cedric Andree for Morrison’s 21st goal of the season & giving the Bulldogs the 1-0 lead at 11:31 of the opening frame. From there Costantini’s heroics would continue as the Bulldogs would kill off three Ottawa power-plays in the first period, with Costantini stopping all 11 shots he faced. The Bulldogs would nearly extend the lead as Isaac Nurse launched a long shot toward Andree’s goal from the top of the slot shorthanded that would deflect off Bradey Johnson but it would be saved along the goal line by defenseman Noel Hoefenmayer to keep the game at a 1-0 score through 20 minutes.

The Bulldogs started the second period with fire in their skates as they’d score back to back goal just 17 seconds apart. First Navrin Mutter would race up the right-wing side of the ice off a George Diaco on a 2-on-1 with Ryan Winterton. Seeing a small opening over the shoulder of Cedric Andree, Mutter would fire a bullet of a shot for 7th of the year at 2:27. At 2:44 of the second, Liam Van Loon would break in on another 2-on-1 with Bradey Johnson, Van Loon would place a perfect shot off Andree’s pad which would spring right to Bradey Johnson for his 6th goal of the year giving the Bulldogs a 3-0 lead. Marco Costantini would then make another show-stopping save as Joseph Gareffa would find Austen Keating in front of the Hamilton net where a diving Costantini would flash the glove and take another sure goal away. Ottawa would strike with a late power-play however as Jack Quinn would score his 42nd of the year at 15:27 to get the 67’s back in the game heading to the third period.

The third period would see the Ottawa 67’s mount a comeback, Jack Quinn would score his 43rd of the year at 6:26 on a play that would see Cameron Supryka be mistakenly given a five-minute major penalty for slew-footing. The Bulldogs would incredibly kill off the five-minute major, starring down the league’s best power-play but the game would be equaled at 13:31 as Austen Keating would find himself open at the side of the net to take a pass from Joseph Gareffa for his 24th of the year. The Bulldogs would regain the lead on a late power-play at 15:18, Arthur Kaliyev would fire the puck to the front of the net, bouncing off both Jan Mysak and Isaac Nurse before crossing the goal line to give the captain his 11th of the season and the Bulldogs a 4-3 lead. It wouldn’t last however as Noel Hoefenmayer would record his 20th of the year at 19:42 to tie the game and send it to overtime.

Off a faceoff in the extra frame, Gareffa would take the puck to the right wing boards, and toss it out front of the Bulldogs to a streaking Hoefenmayer who broke down the slot late and would record his 21st of the season and 2nd of the night to give Ottawa the 5-4 overtime victory.

The Hamilton Bulldogs will return to action closing out the weekend hosting the Flint Firebirds in their only visit of the season to Hamilton on Saturday, February 8th at 4:00pm.