BULLDOGS TAKE DOWN THE PETES 4-3 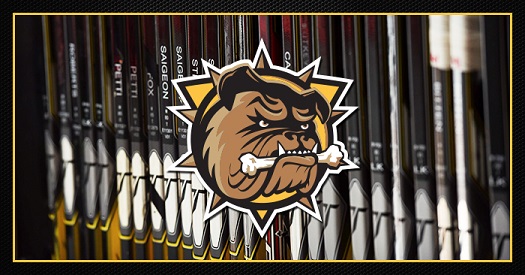 They were banged up and they were on the road, but the Hamilton Bulldogs dug down deep to come up with a 4-3 win over the Peterborough Petes Thursday night for their third straight win.

The Bulldogs power-play went to work early, as Matt Luff (19) found himself with room and moved in from the point and picked the corner at the 3:13 mark. Niki Petti and Matthew Strome picked up the assists. The Petes answered back with a power-play goal of their own tying the game at 1, but Hamilton would regain the lead at 14:11 after Brandon Saigeon (16) stuck with it and buried his own rebound after escaping coverage in front of the net to make it 2-1. Justin Lemcke and Cole Candella assisted on the goal.

Saigeon (17) extended the Bulldogs lead to 3-1 at 9:20 of the second period after firing one past goaltender Dylan Wells on the glove side. The assists went to Marian Studenic and Jack Hanley. The Peterborough power-play connected for the second time on the night to cut the Hamilton lead to 3-2 after two periods.

The Petes tied the game 3-3 early in the third, but the Bulldogs Jack Hanley (2) fired a seeing-eye shot through traffic and into the back of the net to give Hamilton a 4-3 lead at 9:41. Matthew Strome was credited with the only assist. The Petes made a late push, but the Bulldogs were able to weather the storm and hang on for the victory.

The win did come at a price as Luke Kutkevicius left the game in the first period after taking a high stick while Matt Luff went to the dressing room in the second period after being slammed into the boards. Both players did not return.

The Petes out-shot the Bulldogs 36-27, but Hamilton goalie Dawson Carty was solid in the Hamilton net as he picked up his third straight win.

The Bulldogs Brandon Saigeon, with two goals, was named the game’s first star. He now has five goals in his last two games. The Petes Nikita Korostelev was the second star while Hamilton’s Jack Hanley was recognized for his game winning goal with the third star.

The Bulldogs are back in action on Saturday night as they host the Ottawa 67’s at FirstOntario Centre at 7 pm.