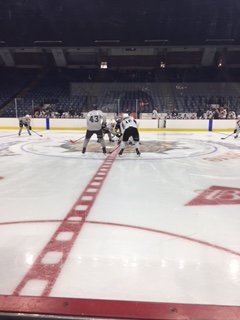 Scrimmage 2 saw Team Black go up against Team Grey. Again Matthew Strome led Team White with three goals, but the hat-trick wasn’t nearly enough as Team Grey cruised to a 10-4 win. A couple of prospects form the 2016 Draft led the way for Team Grey as 10th round pick Dylan D’Agostino scored three times while 4th round pick Jake Murray had a goal and two assists.

Team Grey continued its offensive explosion in the third scrimmage as they beat Team White 13-8. Team Grey was led by a trio of hat-tricks from Will Bitten, Zack Jackson and 2nd round pick from the 2017 draft Arthur Kaliyev. The Bulldogs top pick in that draft Connor McMichael also scored a hat-trick for Team White.

Training Camp wraps up Thursday with the annual Black and Gold game at FirstOntario Centre at 10:30 am. For some of the prospects, it will be their last chance to make an impression on the Bulldogs management and coaching staff.

The Bulldogs will open a 4-game Exhibition Schedule on Friday September 1st when they host the Guelph Storm. The game will be held at the Firestone Arena in Ancaster at 7 pm. Road games are scheduled for Thursday September 14th in Guelph and Saturday September 16th in Barrie. The pre-season for the Bulldogs wraps up on Sunday September 17th against the Barrie Colts at the Valley Park Arena in Stoney Creek at 5 pm.

The regular season opens for the Bulldogs on Saturday September 23rd when they host the Niagara IceDogs at FirstOntario Centre at 7 pm.