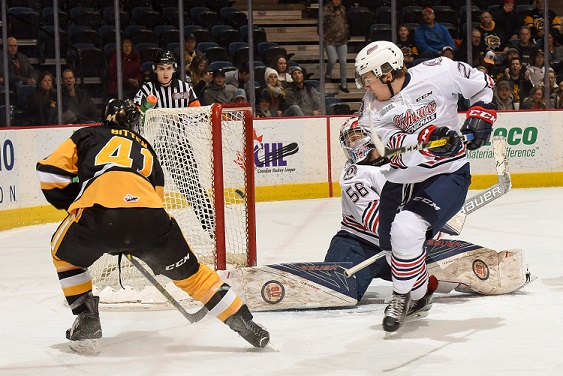 The Hamilton Bulldogs sent a message to the rest of the Eastern Conference as they pounded the 1st place Oshawa Generals 8-2 Friday night at FirstOntario Centre.

The Bulldogs came storming out of the gate and never looked back as they had a 3-0 lead at the end of the first period. The goal scorers were Matt Luff (13), Will Bitten (12) and Matthew Strome (20). Niki Petti picked up two assists in the period with singles to Jack Hanley, Ben Gleason and Brandon Saigeon.

The Bulldogs kept the offense coming in the second period as two goals from Michael Cramarossa (12,13) had Hamilton up 5-0 before the Generals scored twice to cut the lead to 5-2. Mackenzie Entwistle and Connor Walters were credited with assists.

Hamilton didn’t let up in the third period as Luff (14), Bitten (13) and Petti (7) all scored and Kaden Fulcher kept the Generals off the scoreboard with some big saves as the game ended 8-2 in favour of the Bulldogs. Petti, Gleason, Marian Studenic, Zachary Jackson and Cole Candella all got assists on the third period goals.

The Bulldogs’ are back in action Saturday night when they play host to the Niagara IceDogs at FirstOntario Centre at 7 pm.