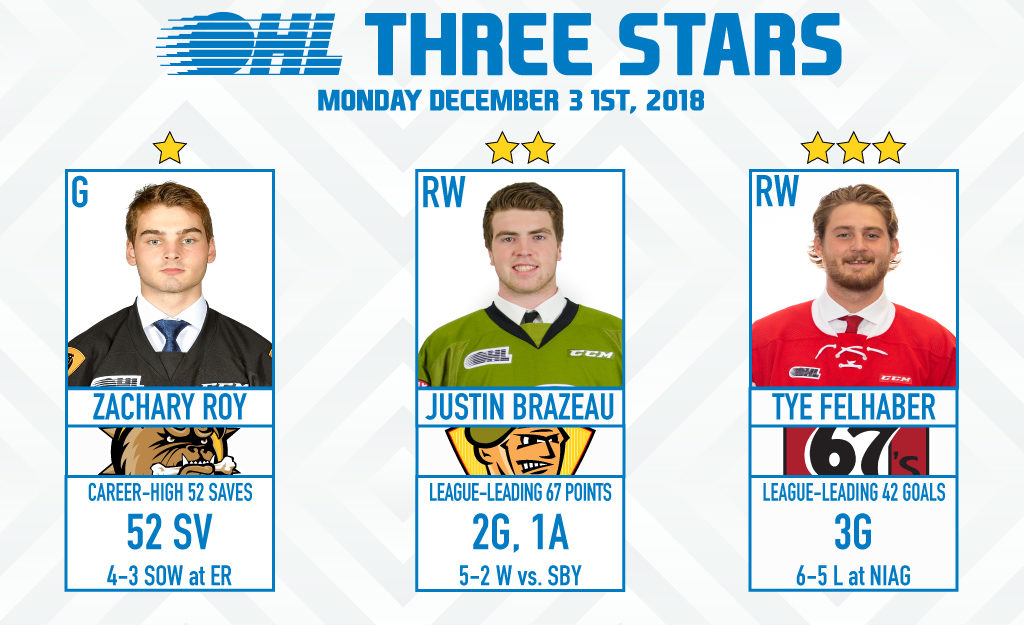 1ST STAR: ZACHARY ROY (HAMILTON BULLDOGS):
Rookie netminder Zachary Roy stole the show on Monday, turning in a career-high 52 save performance on New Year’s Eve to backstop the Hamilton Bulldogs to a 4-3 shootout win in Erie. The 17-year-old native of Callander, Ont. guided the Bulldogs to victory even though they were outshot 55-34. He stopped two of the three shootout opponents he faced, improving to 8-10-1-0 on the season with a 3.39 goals-against average and an .899 save percentage. Hamilton’s fourth round pick in 2017, Roy is a graduate of the Toronto Nationals Minor Midget program where he was an OHL Cup finalist in 2017. He spent last season with the Rockland Nationals Jr. A club.
• GAME HIGHLIGHTS

2ND STAR: JUSTIN BRAZEAU (NORTH BAY BATTALION):
The OHL’s leading scorer, Justin Brazeau continued his steady production on Monday, scoring a pair of goals including the game winner while adding an assist as the North Bay Battalion defeated the Sudbury Wolves 5-2 for their sixth straight victory. Brazeau scored a highlight reel goal in the process, increasing his output to 37 goals and 67 points over 37 games. The 20-year-old from New Liskeard, Ont. is a former 13th round pick of the Battalion back in 2014. He recorded three points or more four different times throughout the month of December. Brazeau attended rookie camp with the San Jose Sharks this past September.
• GAME HIGHLIGHTS

3RD STAR: TYE FELHABER (OTTAWA 67’s):
OHL goal-scoring leader Tye Felhaber increased his season total to 42 on Monday as the Ottawa 67’s dropped a 6-5 road loss in Niagara. Felhaber’s third hat-trick in the month of December gives him the most goals by a 67’s player since Shane Prince (43) and Tyler Toffoli (52) put up big totals during the 2011-12 season. The 20-year-old from Pembroke, Ont. scored all three of his goals in the third period and is second in the OHL with 63 points (42-21–63). Now in the midst of a 12-game point streak, the former 10th overall pick of the 2014 OHL Priority Selection has helped pace the 67’s to an East Division leading 27-7-3-1 record.
• GAME HIGHLIGHTS