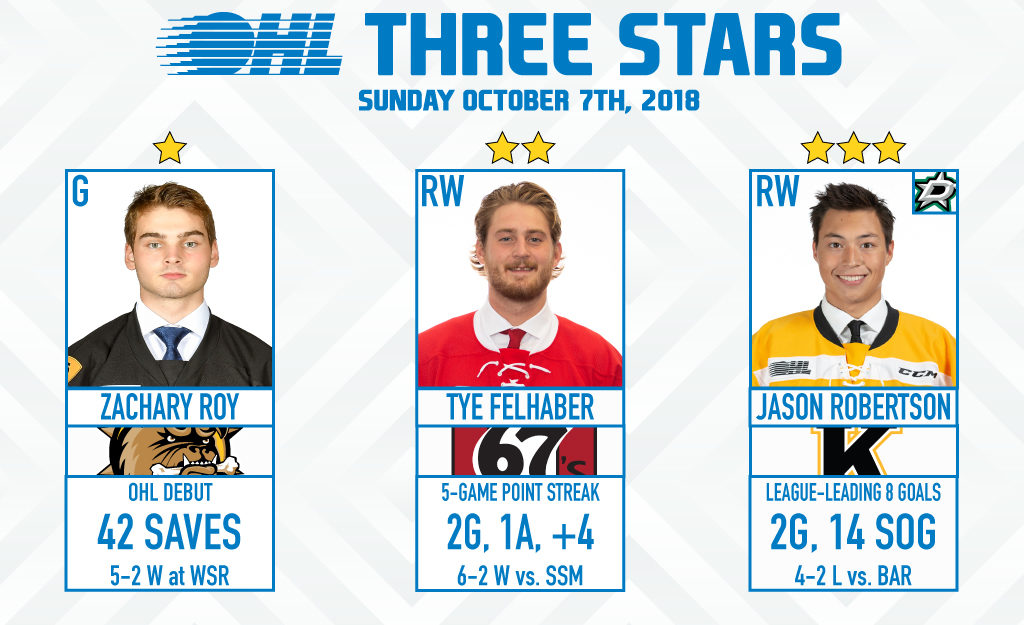 1ST STAR: ZACHARY ROY (HAMILTON BULLDOGS):
Not a bad way to start your OHL career. Hamilton Bulldogs rookie Zachary Roy made 42 saves in his OHL debut to lead the Hamilton Bulldogs to a 5-2 road win in Windsor. Roy managed to outduel defending OHL Goaltender of the Year Michael DiPietro across the ice as his Bulldogs were outshot 44-24. A 17-year-old native of Callander, Ont., Roy was Hamilton’s fourth round pick in the 2017 OHL Priority Selection after leading the Toronto Nationals to an appearance in the OHL Cup Final. He spent last season with the CCHL’s Rockland Nationals.
• GAME HIGHLIGHTS

2ND STAR: TYE FELHABER (OTTAWA 67’s):
Overage winger Tye Felhaber extended his point streak to five games, scoring twice while adding an assist in a 6-2 win over the Sault Ste. Marie Greyhounds. Felhaber opened the scoring just 4:36 into action before striking again late in the second for his seventh of the campaign. He joined teammate Austen Keating with three points on the afternoon as the 67’s improved to 5-3 out of the gate. Felhaber played in his 250th career regular season contest this past weekend. He has 11 points (7-4–11) through his first eight games of the season.
• GAME HIGHLIGHTS

3RD STAR: JASON ROBERTSON (KINGSTON FRONTENACS):
Last season’s league shots on goal leader, Jason Robertson kept racking them up on Sunday afternoon with 14 to his credit in a 4-2 loss to the Barrie Colts. Robertson scored twice, pulling into the OHL lead for goals with eight on the season. The Dallas Stars prospect has 109 goals on his OHL career as he approaches the 200-game milestone. A native of Northville, Mich., Robertson attended USA Hockey’s World Junior Team evaluation camp this past summer.
• GAME HIGHLIGHTS