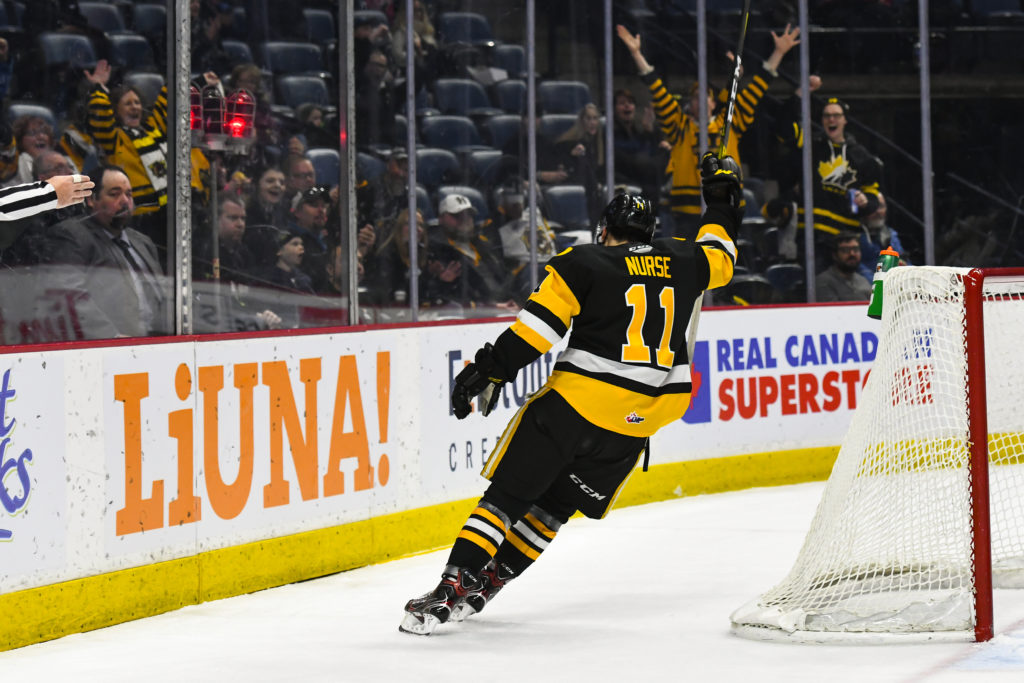 HAMILTON, ONTARIO. Bulldogs’ captain Isaac Nurse iced the 2019-20 K9Cup with his goal at 12:47 of the third period giving the Bulldogs a 5-3 victory, and a 4-2 victory in the season series. Jan Mysak would score the game winning goal while the Bulldogs would see tremendous efforts once again from budding stars Ryan Winterton & Lawson Sherk and Zach Roy remained hot in goal stopping 32 shots in the victory.

The Niagara IceDogs got a jump on the Bulldogs in the first period at the Meridian Centre on Friday night as Ivan Lodnia would score his 23rd of the season just 0:42 seconds into the game from Oliver Castleman & Andrew Bruder before Jake Uberti would score his 15th of the period at 3:24 from Castleman & Lodnia on the power-play to give the IceDogs a surprising 2-0 lead. From there the period would swing to the Bulldogs, as the team would get a 5-minute major power-play as Jackson Doherty would be called for blindsiding Michael Renwick and give the Bulldogs a crack in the window to get back in. At 6:01 the comeback would start, Ryan Winterton would find Kade Landry at the middle of the blueline who would fire a wrist shot on goal that would be tipped by Lawson Sherk for his 4th goal of the year to cut the lead in half. Hamilton would even things up just over 10 minutes later at 16:55 as Navrin Mutter drove the left-wing side and hit the breaks to feed the left point where Kade Landry would launch a cross-ice pass to the bottom of the right circle where Ryan Winterton was all by himself. With IceDogs goaltender Andrew MacLean exploding off his line, Winterton would beat him clean over the glove for his 11th of the year and getting the Bulldogs on level ground through 20 minutes of play.

The second period would see a faster start for the Hamilton Bulldogs, as Isaac Nurse and Logan Morrison would combine to get to the puck to Arthur Kaliyev who would step down the slot and beat Andrew MacLean under his glove at 5:22 to give the Bulldogs their first lead of the game on his 38th of the year. It was a lead that Zachary Roy would desperately try to protect as he would deny Cameron Butler on a breakaway as well as Jake Uberti on a rebound to keep the Bulldogs in the lead. Niagara would not be denied in the second period however as at 18:12 Jake Uberti would jump on a loose puck in neutral ice and drive the right-wing shot, finding just a couple inches of space over Zachary Roy’s shoulder and hitting the back bar to tie the game 3-3 heading into the second intermission.

With the game tied into the final frame, the Bulldogs would show their heart, taking the attack to the IceDogs and it would pay off at 8:06 of the period as Nathan Staios quarterbacking the power-play would combine with Logan Morrison to get the puck to Jan Mysak who would find just a few inches of space over MacLean’s shoulder to score his 9th of the season and give the Bulldogs a 4-3 lead. Just over four minutes later the captain would put the game on ice, as Payton Vescio would feed Liam Van Loon in his own zone who played a perfect, billiard-like indirect pass to Isaac Nurse who would beat MacLean under his arm to make it 5-3 at 12:47. There would be no more scoring in the game in large part due to the work of Zachary Roy who would stop 32 of 35 in the win.

The Hamilton Bulldogs will return to action at home to hosting the Sault Ste. Marie Greyhounds on Saturday, February 15th at 4:00pm before closing out a busy weekend hosting the Kitchener Rangers for the Family Day Matinee on Monday February 17th at 2:00pm.