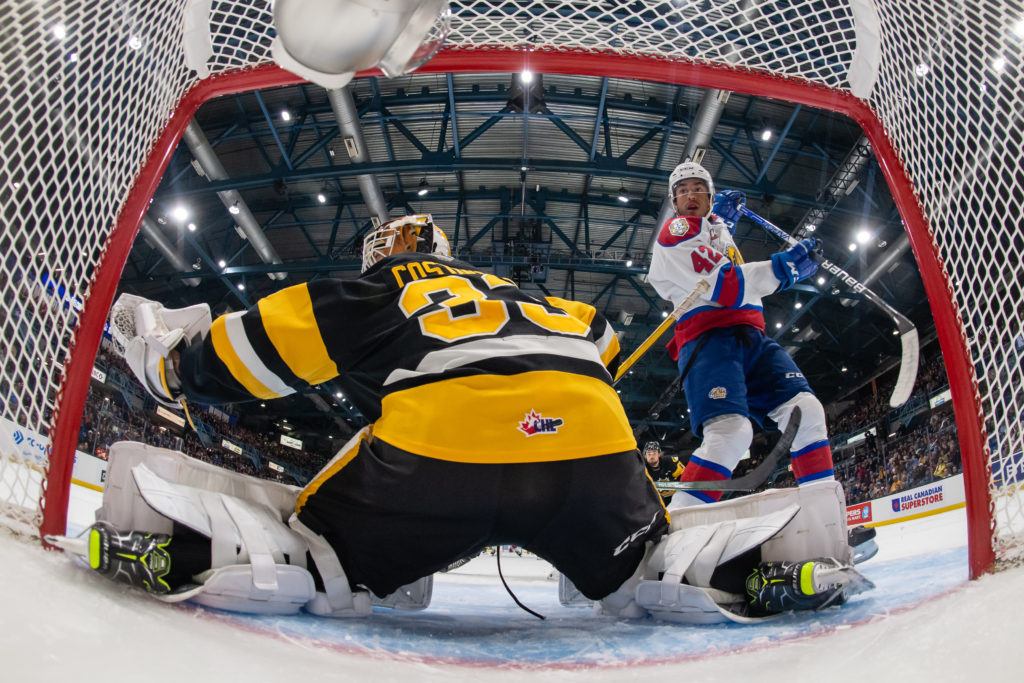 HAMILTON, ONTARIO. Facing a must-win to continue their season in Saint John on Friday night the Hamilton Bulldogs entered their final Memorial Cup round robin game against the WHL Champion Edmonton Oil Kings with a Game 7 mindset.

The Bulldogs opened the game with the lion’s share of zone time but it was the Oil Kings who raced out to an early 7-2 advantage in shots on goal which were all turned aside by Marco Costantini keeping the game scoreless. With the Bulldogs on the man advantage at 9:09, Arber Xhekaj moved the puck to the left half boards to Logan Morrison who faked a cross ice pass to Mason McTavish before dealing to Avery Hayes along the goal line where he hinged out and beat Sebastian Cossa to the far side past his pad giving the Bulldogs a needed 1-0 lead. Marco Costantini continued his mastery in the opening frame, stopping Simon Kubicek with glove saves on back to back breakaways as part of the 16 he turned aside overall in the first period. Before the period was out at 16:47 with the Bulldogs back on the power-play, Nathan Staios gloved down an attempted zone exit moving the puck to his right to Mason McTavish who followed with a one-touch cross ice pass to Logan Morrison going back across the front of the net where Ryan Winterton converted the tic-tac-goal, giving the Bulldogs a 2-0 lead through 20 minutes.

The offences on either side were held in check in the second period through a tremendous performances from both goaltenders. Marco Costantini continued his take-over of this essential quarter-final, walling off chance after chance from the Western Champions, stopping all 15 shots he faced in the second period to hold the Bulldogs lead through 40 minutes at 2-0. The news was not all good for the Bulldogs however, loosing Nathan Staios for the night on a hit from behind by Simon Kubicek leaving the Bulldogs down to just 5 defensemen the rest of the way.

The Oil Kings entered the final frame a desperate team and despite an early Bulldogs power-play it was Jalen Luypen who put an end to Marco Costantini’s shutout bid at 2:03 shorthanded cutting the Bulldogs lead in half, 2-1. Costantini continued his heroics, including an incredible stop with the puck wiggling towards the goal line that the net minder was able to paddle away from the net keeping the Bulldogs ahead. At 13:26, Patrick Thomas worked his way down the left wing, turning away from two Edmonton checkers and firing the puck onto the stick of Mason McTavish whose back foot one-timer hit the back bar and buried in the back of the goal to give the Bulldogs a 3-1 lead. With Sebastian Cossa pulled and the Oil Kings 6-on-5 at 17:14 they pulled one closer one more time as Carter Souch’s shot was deflected by Jake Neighbours in front of the Hamilton net, cutting the lead back to 3-2. With Cossa on the Edmonton bench one more time, Costantini made another series of stops to keep the Bulldogs ahead while clears from Logan Morrison & Avery Hayes eventually led to Mason McTavish hitting the empty net, from Hayes & Arber Xhekaj at 19:59 to give the Bulldogs a 4-2 victory, advancing the team to the Memorial Cup semi-finals on the back of 40 Marco Costantini saves.

The Hamilton Bulldogs return to action at the Memorial Cup on Monday night, June 27th, facing off with either the QMJHL Shawinigan Cataractes or the host Saint John Sea Dogs at 6:00pm eastern time in the tournament semi-final.