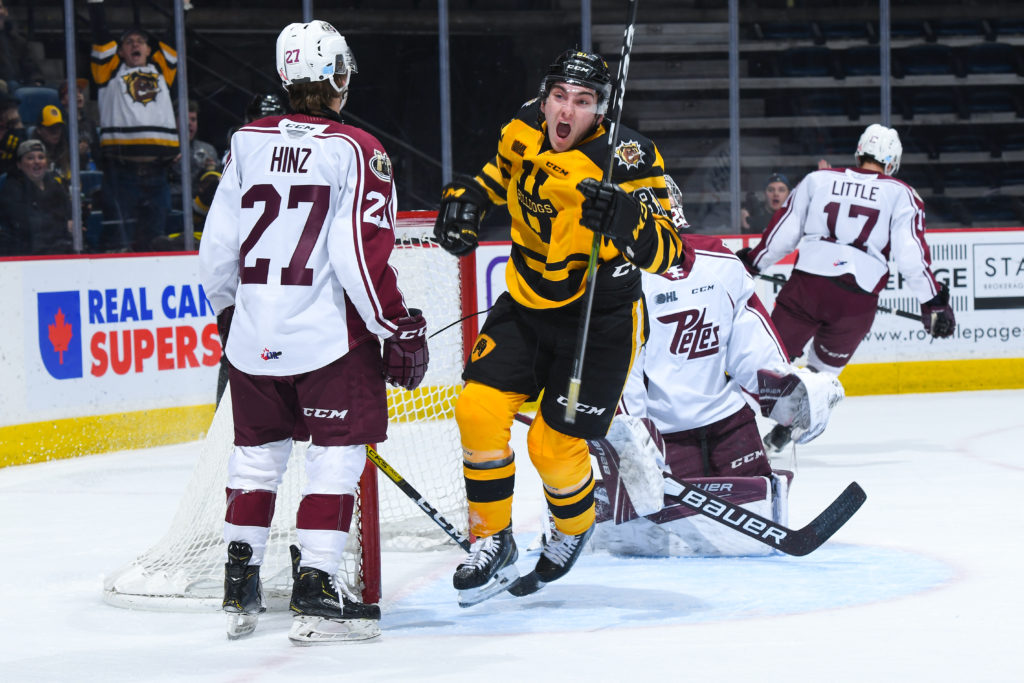 HAMILTON, ONTARIO. Marco Costantini made 37 saves for the second straight game against the Peterborough Petes, earning a 3-1 victory with Nathan Staios scoring his 5th of the season just shy of two minutes into the third which would stand as the game winner for Hamilton. With the victory the Bulldogs pull into sole possession of 6th place in the Eastern Conference and have won back-to-back contests against Peterborough.

It was a great road period for the Hamilton Bulldogs to open their game in Peterborough on Thursday night, as the Bulldogs would come out with speed and drive possession in the Petes’ zone forcing Hunter Jones into plenty of work in the opening 20 minutes. The pressure from the Bulldogs would pay off at 8:58 as Liam Van Loon would keep the puck in at the right point, kicking it down to the right-wing corner where he would get help from Bradey Johnson to loosen the puck up and drive the short side of the goal putting his initial shot off the apron of the goal before sneaking a shot through Hunter Jones, Van Loon’s 3rd of the year, giving Hamilton the 1-0 lead. By the end of the first period the Bulldogs would outshoot the Petes 13-5 with Marco Costantini stopping all 5 he faced sending Hamilton to the room with the 1-0 lead.

The Petes were expected to have a quick start to the second period, and came out bringing the pressure to the Bulldogs, outshooting the Bulldogs 18-8 in the second period but Hamilton goaltender Marco Costantini was sparkling stopping all but one that he would face. The Bulldogs would manage to kill a 5-on-3 in the second period but when their power-play had a chance to get to work, it was the Petes who would cash in. At 11:35, Akil Thomas would bank the puck off the boards past a pinching Jan Mysak creating a 2-on-1 with Nick Robertson, with a perfect pass across the ice Thomas would set Robertson for his 47th of the season tying the game at 1-1. Bradey Johnson would nearly extend the lead off a great point shot from Kade Landry which the veteran centre would tip and just roll wide. The game would head to the locker room after 40 minutes all tied up with both teams looking for a dramatic third period.

The third period belonged to Hamilton as the Bulldogs would shift momentum back in their direction, earning an early power-play that would see Logan Morrison & Arthur Kaliyev combine to work the puck back to the middle of the offensive blueline for Nathan Staios who sent a bullet of a shot back across his body into the top right corner for his 5th of the season at 1:43 to give the Bulldogs a 2-1 lead. It was then handed to Marco Costantini to keep the door shut the rest of the way, and he would, stopping 15 third period shots from the Petes and 37 overall on the game to get the Bulldogs a dramatic victory. The win would be capped by Jan Mysak racing away from traffic and scoring into the empty net at 19:56 to give the Bulldogs a 3-1 final.

The Hamilton Bulldogs will return to action at the FirstOntario Centre hosting the Oshawa Generals on Saturday, February 22nd at 4:00pm.