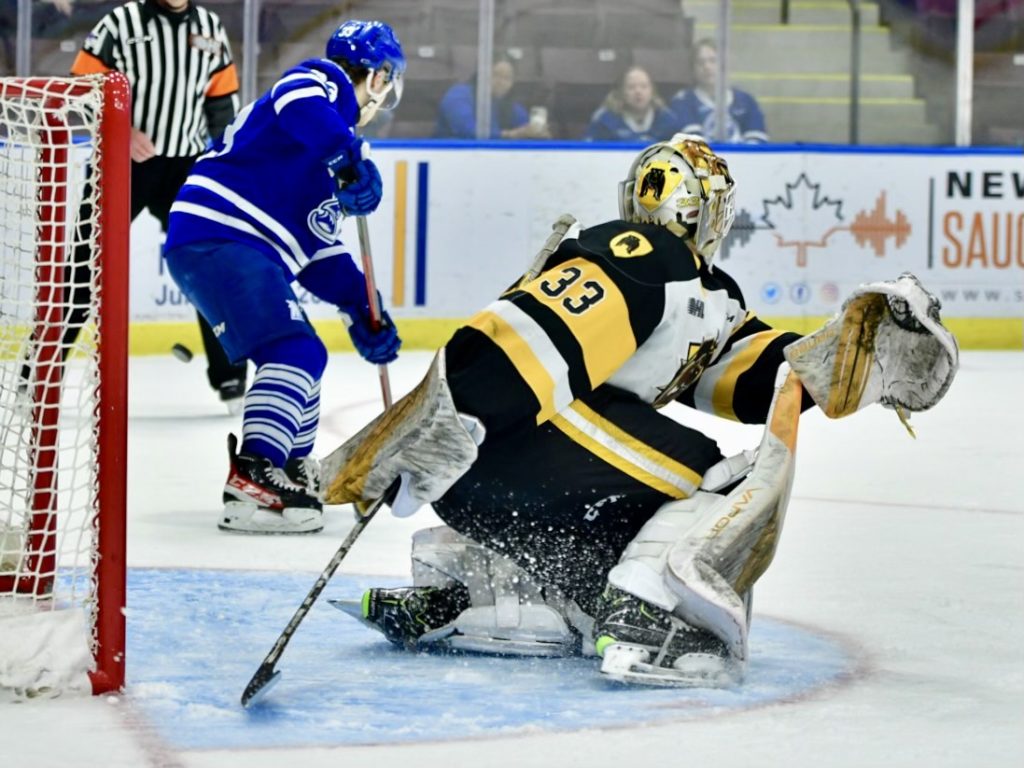 HAMILTON, ONTARIO. With a chance to take a 3-0 series lead the Bulldogs took a trip down the QEW to face off against the Steelheads as the series shifted to Mississauga. The Bulldogs lineup looked quite a bit different from Game 2, still missing leading goal-scorer Avery Hayes, Jan Mysak & Mark Duarte were also deemed unavailable but Hamilton was bolstered by the return of Arber Xhekaj on the blue line.

The first period both teams looked for their footing, testing out Marco Costantini and Joe Ranger with wide open shots from Gavin White and Max Dodig at either end. The Bulldogs had their best early chances with Ethan Sims & Ryan Winterton buzzing Ranger’s goal shorthanded but the game remained scoreless. With 8:14 Costantini made save of the period from a tangle in front of the net, finding the puck while in the splits and reaching out for the puck to keep the game deadlocked. At the end of 20 minutes the game remained scoreless thanks to Costantini stopping all 12 he faced while Ranger turned aside 10 of his own.

With the Bulldogs on the power-play at 5:54, Costantini sent a beautiful head man pass to George Diaco catching the Steelheads in a line change, Diaco strode his way into the Mississauga zone and ripped a shot over Ranger from the left wing circle giving the Bulldogs an all important 1-0 lead. Just past the halfway point of the middle frame Jake Uberti ran Nathan Staios from behind sending the Bulldogs talented blue liner down the tunnel and Hamilton to a 4-minute power-play. The Bulldogs made the power-play count as Gavin White set Diaco to the top of the left circle all by lonesome to collect his second point of the game sending a cross-crease pass to Ryan Winterton who was set backdoor to put the Bulldogs up 2-0 at 13:53. With Costantini and Ranger each facing 24 shots, the Bulldogs led the Steelheads 2-0 heading into the third starring at a series stranglehold.

Despite dealing with just five defensemen into the third period the Bulldogs battled through a pair of penalty kills, at one point being down to just three available defenders with White & Grushnikov seated in the penalty box and still holding the lead through Costantini’s work. With the Steelheads adding the extra man by pulling Ranger, it was the Bulldogs who had the final word. With the puck battled out of the defensive zone by Ryan Winterton to Mason McTavish, the Bulldogs talisman spun the puck onto Logan Morrison, recording his 9th of the playoffs into the empty net securing the Bulldogs victory. On the back of 35 saves from Marco Costantini the undermanned Bulldogs earned the 3-0 shutout victory, Costantini’s first playoff shutout, to push the Steelheads to the brink of elimination with a 3-0 series lead.

The Hamilton Bulldogs are back on Friday May 13th looking to close the series at 7:00 p.m. for Game 4 at the Paramount Fine Foods Centre.