COULOMBE WALLS OFF BULLDOGS IN 3-2 LOSS AT MEMORIAL CUP 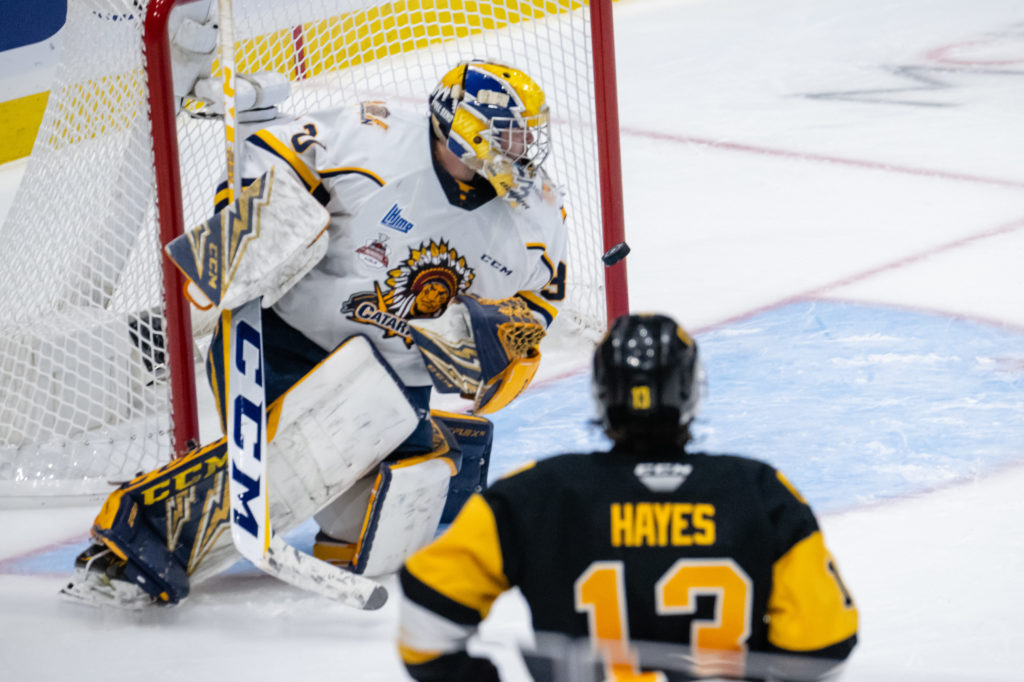 HAMILTON, ONTARIO. After a two day break from play in Saint John the Hamilton Bulldogs squared off the QMJHL Champions, Shawinigan Cataractes on Thursday night at Harbour Station. Shawinigan entered the night 1-0 in the tournament after their opening victory against the WHL Champion Edmonton Oil Kings while the Bulldogs looked to make a statement.

Opening the first period the Bulldogs stormed the gates of Antoine Coulombe’s goal racing out to a 13-4 advantage in shots on goal in the first half of the first period. Hamilton earned an opportunity 5-on-3 and the power-play continued where it left off on opening night with Nathan Staios feeding a Mason McTavish one-timer with a perfect pass for McTavish’s 1st of the tournament at 5:08. Penalty trouble dogged the Bulldogs however at 6:47 with the Cataractes on a power-play of their own Xavier Bourgault converted an excellent Mavrik Bourque pass to tie the game 1-1. With Shawinigan on a 5-on-3 at 11:42 the ensuing face-off from the penalty was won back to Mavrik Bourque who fired a shot past Marco Costantini to give the Cataractes a surprising 2-1 lead. Hamilton continued to fire away, leading the game in shots 19-9 through 20 minutes but trailing 2-1 as the teams headed down the tunnel.

The second period was much tighter with the Cataractes going to the power-play for another pair of opportunities that the Bulldogs were able to battle aside with Marco Costantini making a series of strong saves, including one in tight on Mavrik Bourque and Xavier Bourgault each in the frame. With the second period winding down, Ryan Humphrey collected a loose puck behind the Shawinigan goal, working it up to the left point where Artem Grushnikov let loose a rocket that Avery Hayes was able to tip down to tie the game at 17:28 on his 2nd of the tournament. After two periods of play, the two Championship teams found themselves right back where they started, tied with 20 minutes to go.

After an early period Bulldogs power-play went for naught through the goaltending of Antoine Coulombe, the Cataractes went back to the man-advantage and struck through a goalmouth tip from Olivier Nadeau to give Shawinigan a 3-2 lead at 7:06. The Bulldogs pressed right down the stretch but Coulombe wouldn’t be beaten, turning aside 38 of the 40 shots he faced securing Shawinigan’s Cinderella story continues in a 3-2 win putting the Bulldogs into a do or die scenario on Friday night.

The Hamilton Bulldogs return to action at the Memorial Cup on Friday night, June 24th, facing off with the WHL Champions Edmonton Oil Kings at 6:00pm eastern time in a one game scenario to make the semi-finals.